From the usability and visual side, seems it's made and optimized for heavily vision-impaired persons (?)
It's terrible, offers no overview, the sorting seems non-functional (it does something but the results don't remotely match it), search Strings are apparently entirely ignored.

I only wanted to enter to see if I could cast my 4 Votes on specific issues.
Guess what, no chance to even find them.

How it's possible for someone to design a full-page Screen that only shows 5 arbitrary entries is beyond me.
If I had to rate it, I'd score it as "almost unusable".

That's one textbook example how >not< to design a UI.
90% of display space is wasted for absolutely no sane reason while offering virtually no Information and being a nightmare on accessibility.
I definitely won't be using this, especially since it doesn't even do a thing in a common Browser.

The old Bug Reporting Format in the old Forum might not have been the most perfect System - but at least it worked, provided quick and comprehensive overview and inherited the Accessibility of the Forum.
Last edited: Apr 6, 2019

You cannot edit your own bug reports! So I have to add an additional comment in order to be able to attach some new information.

I also accidentally posted a report in the wrong section (sorry Planet Coaster ), but I have no way of moving it. I tried to add a bit more information, as someone had replied to it, but I can't add and it won't tell me why. 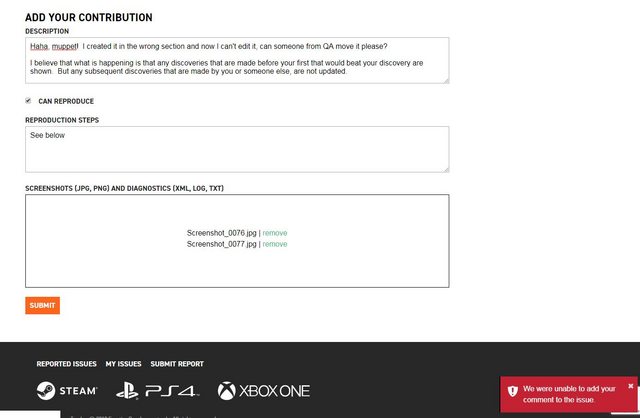 Oh I worked out it's because the Reproduction Steps needs to be 30 characters, even though it doesn't say it does.
Last edited: Apr 6, 2019

Ozric said:
You cannot edit your own bug reports! So I have to add an additional comment in order to be able to attach some new information.
Click to expand...

heh - I was wondering about that, but since you can't even tell what is your comment (as they only have that Frontier Id) I guess they don't want you to. If QA eventually answer any of the reports then I'm interested if we will be able to see that, as the page is very bland at the moment.

Do you guys also get captcha every time you do anything on Issue Tracker?
Last edited: Apr 6, 2019

Bier00t said:
Do you guys also get captcha every time you do anything on Issue Tracker?
Click to expand...

Yep. It is a little draconian but it defeats that infamous bug reporting bot exploit

This is exactly what i wanted to say.

can't login to site, banners take half the screen and sometimes covers the input field "password".

1) Bug URLs should be more friendly - when I paste https://issues.frontierstore.net/issue-detail/181 into discord etc there is no way for anyone to know what I have linked by reading the URL.
2) If you could make it so we can link to menu options as well it would be cool - no way to the moment to send a link to 'confirmed' issues, people need to navigate through the site, which is not great.

Well I can see changes coming to Issue Tracker - lovely!

Why did they get rid of the bug report forum. It allows people to ask questions in a more reasonable way. This should have been done in addition to the bug report forum. And have it be to help figure things out going into this and have more advanced discussion. Only having one is more stressful and less versatile for end users. Just have the bug report forum be a normal general forum at minimum. Or tie it into the new system somehow. Or is that planned?

Also, I think I submited an issue but I don't think it accepted it. I thought it did but when I went back to look at my issues it just had the field I filled in minus the title. It did not display the issue i any sense although it said I submited it. Can we not see the issues right away?
Last edited: Apr 18, 2019

I've noticed frontier that you have not acknowledged one single bug reported on the new issue tracker. Do you ever intend to?

There are quite a few fixes in the latest patch that seem to match bugs in the Issue Tracker.

Is there a timescale for those to be marked as fixed?

Another annoyance: I see a few duplicates in the bug reporter. Do you have a way to merge them to reduce the noise?

Site seems not to be working - any ideas if it will be back?

There is a problem with the Issue Tracker - but not that it is empty or something. For me it worked just now!

The problem is, that there are a lot of new issues reported now after the patch. And the problem with this is, that several issues were reported with different descriptions/headers, but are clearly about the same issue. As a consequence, for example the issue with the priority reset has several reports, one is already shown as 'Confirmed' and up to vote, while others still are active. It is unrealistic to hope, that people will 'confirm' in all these reports, but on the other hand it is left to us users, to look through now around 60-70 pages bug reports to find if a certain issue already has a report. This will never work!
And it casts serious doubt on the voting system, because what if I spent a vote on the 'Confirmed' issue with module priorities (actually did so), and one or more of the other reports about the same issues becomes confirmed? Am I expected to waste votes on this?
Who merges reports about issues which clearly are the same issue? I would not want to do this, as it would probably take hours, which should be spent for better things.

Please think about this!

I suspect that the duplication issue could be reduced if people would spend a little time using the search function on issue tracker first.

There is also something that checks for similar reports, but I haven’t checked it out, it appears about 2 screens in when submitting a report.

For me, it turns out that the Issue Tracker does not show any issues on Chrome.
If I use IE, then I can see live issues.

aRJay said:
There is also something that checks for similar reports, but I haven’t checked it out, it appears about 2 screens in when submitting a report.
Click to expand...

The 'Matching issues' feature is terrible - it's far too strict. I copied the first 29 characters of the title of an existing issue and just changed the last character, and it did not find a match! Thankfully the search facility is nice and loose, so like you say I guess the people that raised the restock all bugs didn't use it
You must log in or register to reply here.
Share:
Facebook Twitter Reddit WhatsApp Email Link
Top Bottom