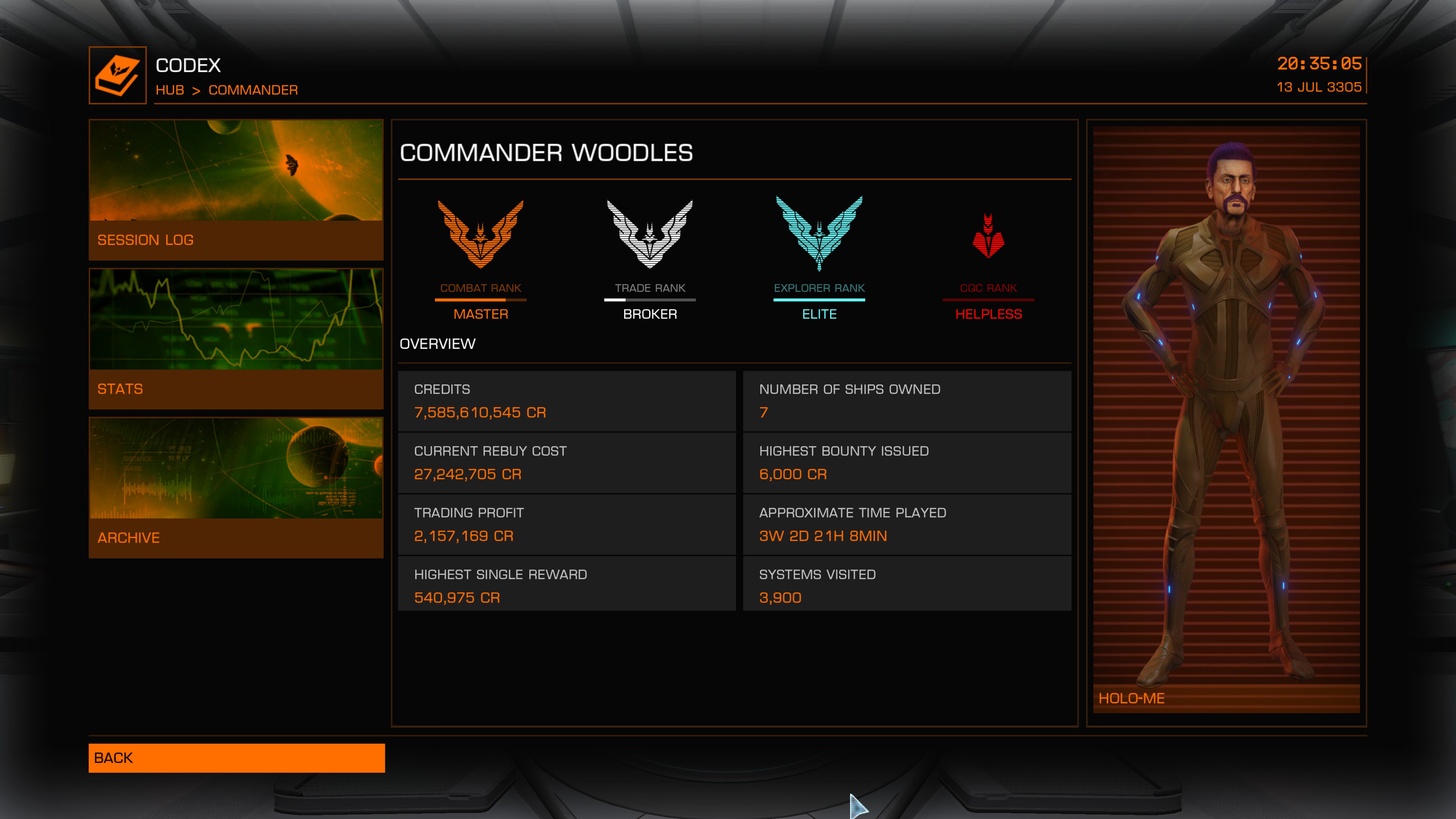 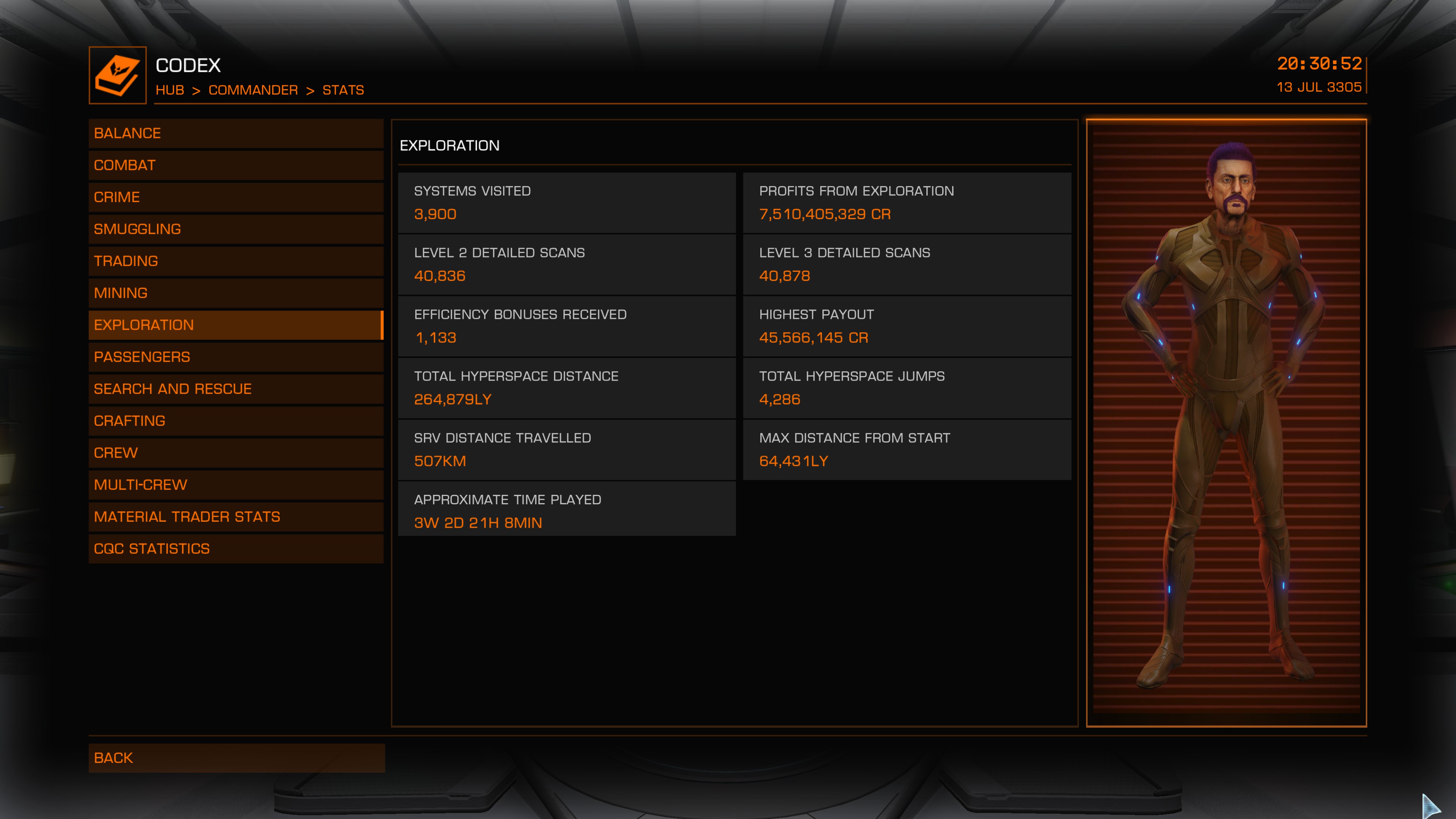 All updated again, sorry for the wait. Congratulations, Commanders!

X
Today I've became Elite Explorer!
It's a really big thing for me. My first Elite rank, AFTER 4 YEARS!!!
Long story short: in 2016 I was ~75% Pioneer and went to neutron star hunting. I was killed before I turned in my datas (my Fault, cca. 500 system scan lost). Do you remember, how mad and unbalanced were the NPC's in the beginning of 2.1? Lost the mood and RL things happend. I suspended the game.
But today I've reached my second goal! The first was to get an AspX.

X
My commander profile on Inara

And the proof that I reached it under 150M Cr

@ Tiberius Duval: Welcome to the roster!

@ Xaey: please post an in-game screenshot with your Elite rank and CMDR name if you wish to be included. As per the first post:

marx said:
If you'd like to be included in the Hall of Fame, please post an in-game screenshot showing your Elite Exploration rank (and your CMDR name)
Click to expand... 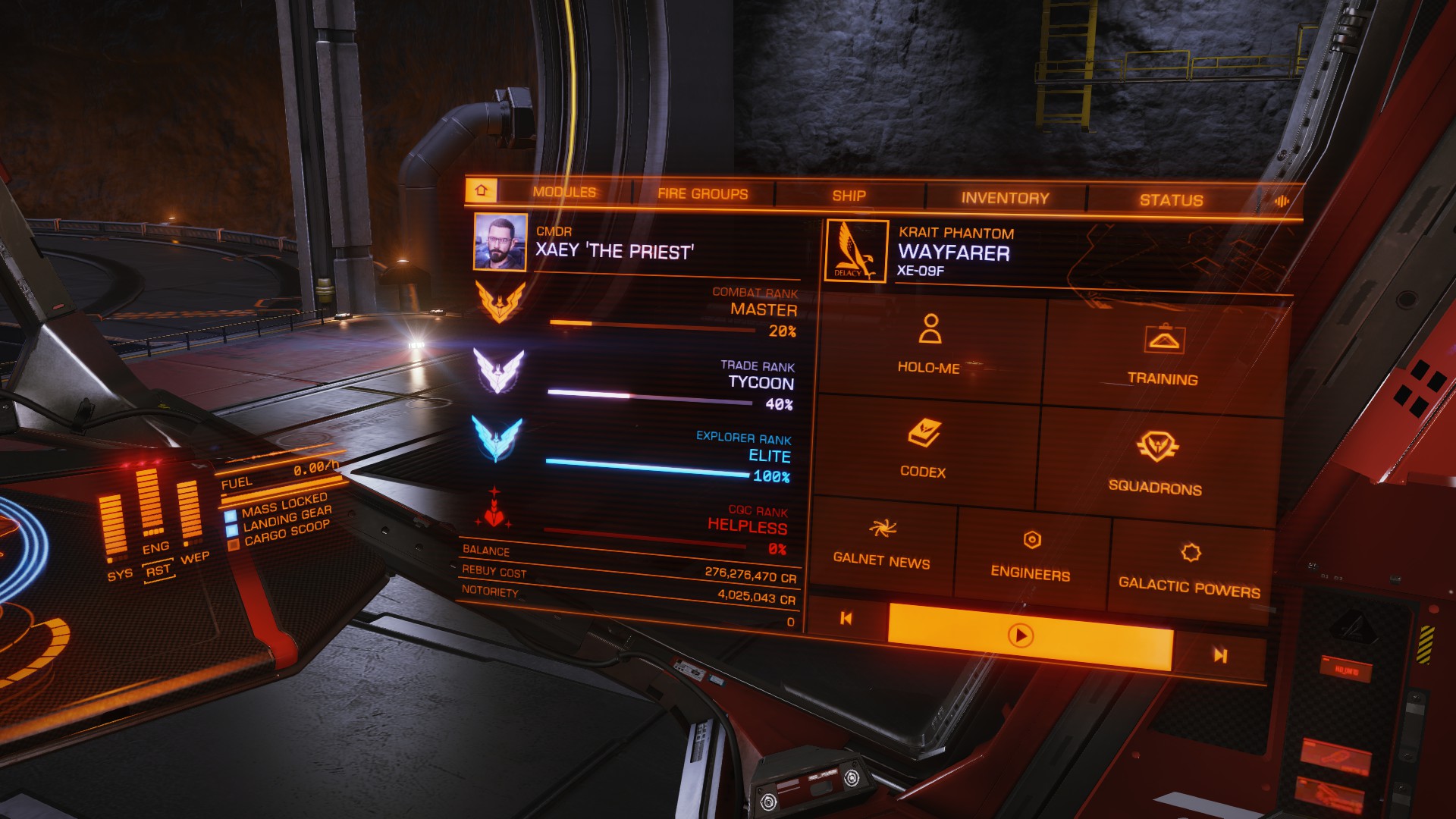 Sorry! Here it is.

I hit Elite Explorer tonight. Wasn't expecting it yet, so it's a nice surprise. I'm pleased. Oh, a slimming mirror for your Commander, is it?

Anyway, congrats on your latest milestone!

Yeah, those funhouse mirrors do wonders for the figure.

I've decided to stop updating the list, but to give fair notice to anyone who might have been planning to post here, I'll do so two weeks later instead. If anybody would like to post here, then you have until Sept. 17: the list will be closed then. I'll ask the moderators to unsticky the thread and perhaps to close the thread.

The reason is simple: I found that I'm thankful that there has been little interest in new Elite in exploration Commanders posting here lately, because looking at the numbers, there must be a lot of them - could likely reach five digits too. This was after Chapter Four made getting Elite much faster, of course. Now, even if "only" hundreds of them were to post here, I'd likely be overwhelmed. Of course, I could just stick to tracking the myriads, Elite Plus status and whatnot, but I feel that would be quite unfair to the "regular" Elites. Besides, EDDN does track all the statistics of the players who upload them, so that's better.

Finally, if somebody would like to use the data here, then as long as you give credit, I'm fine with it.

Thank you for the great job you've already done!

Highly understandable given that there are so many potential entries now. Sad that the list is going to become a monument to the days when Elite Explorer took considerable time and effort and was an event that commanders wanted to have commemorated permanently here, but in a way that does serve as a good reminder of it too.

I am very glad I attained Elite Plus, and am honoured that I am in the list as it is.

Many thanks for your diligent maintenance of the list in all its ways over all this time, Marx.

M
Was worried I wouldn't get the right date for my elite, but, fortunately, EDDiscovery keeps track of promotions. So here it is; proof that I got my elite on 3304-10-16: 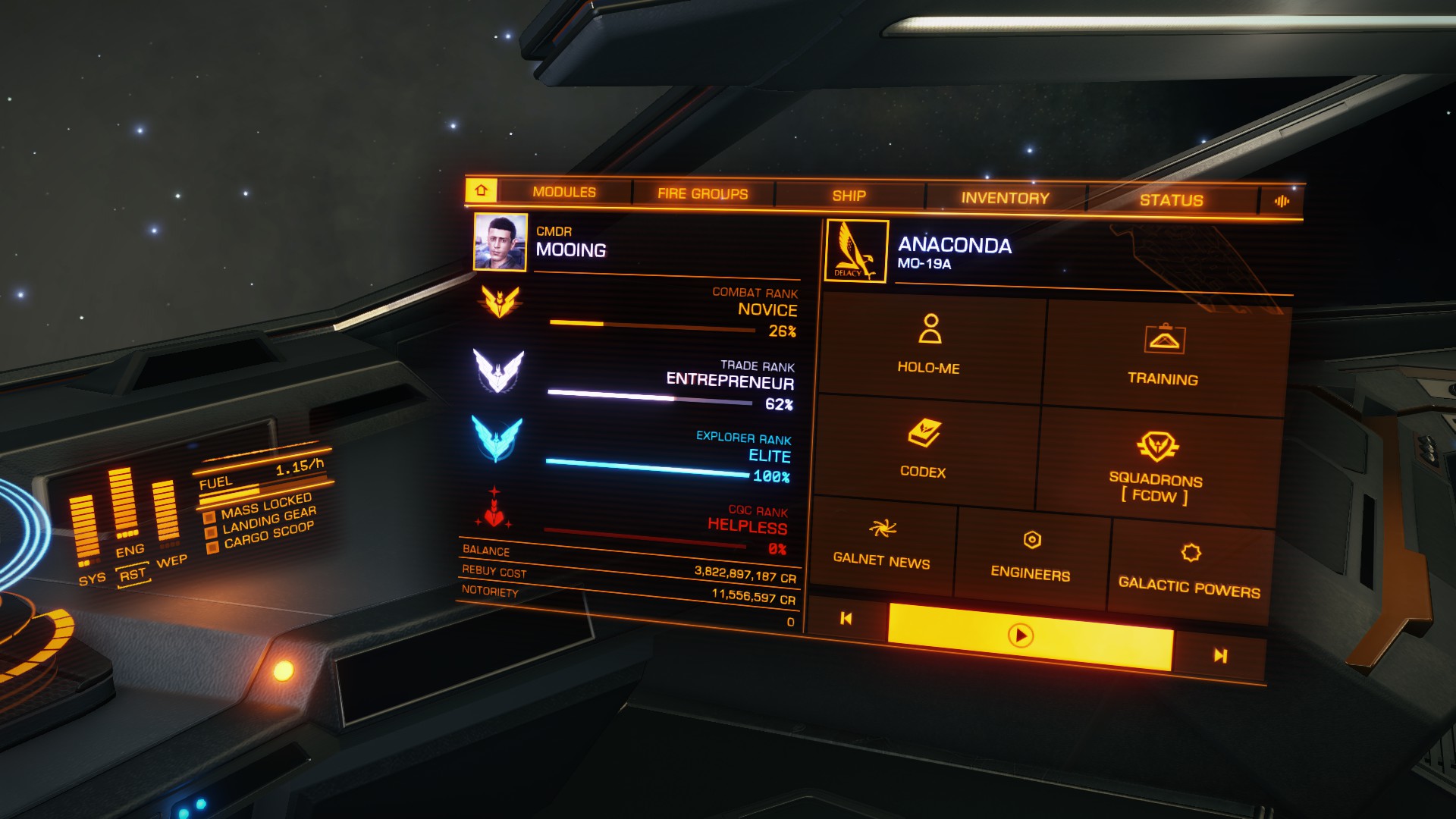 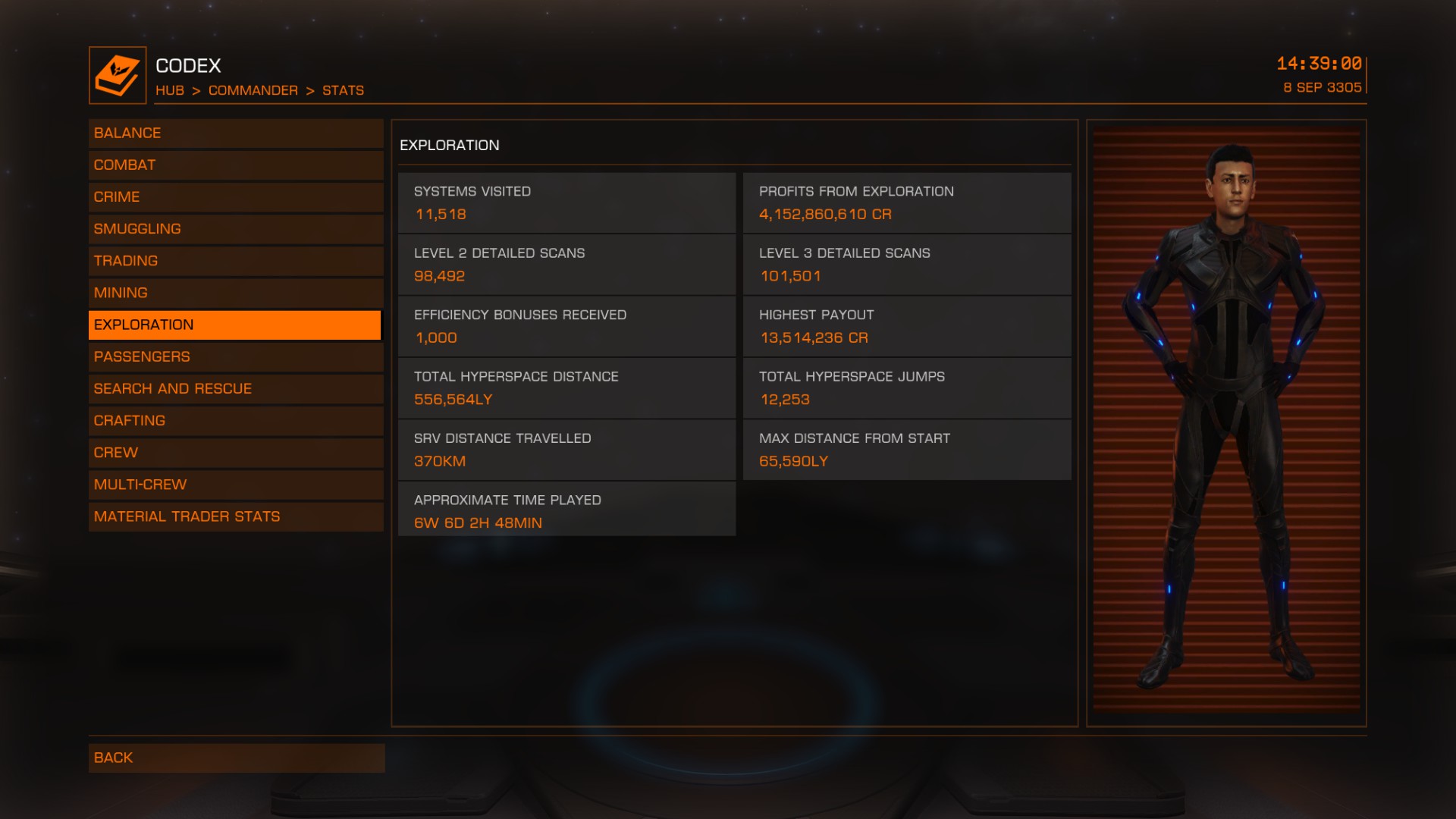 Glad to see this is still running thanks to Marx. I am still active but not on the forums. Hope to get my third myriad imminently.

To Mooing, congrats on making Elite the classic way!
To Whiterose: your post had a bit of an unfortunate timing, heh.

And with that, the deadline's over (I didn't think it would fall on a patch day), and for the reasons mentioned before (see here), I'll no longer be updating this thread. (Fun fact: looks like it almost hit the character limit for forum messages anyway.) Thanks, everyone, and good luck out in the black!
Last edited: Sep 18, 2019