J
Back in the mid 2000s when i was in the early days of modding RCT3 a couple of guys over on atari forums decompiled the ovl files and built an importer. It was clunky and there was alot of unknown 'check this box but we arent sure why' etc but it worked and it worked very well. Then came custom track from another guy, then custom cars and eventually custom flatrides until there wasnt really an area that wasnt moddable. even the UI was moddable. 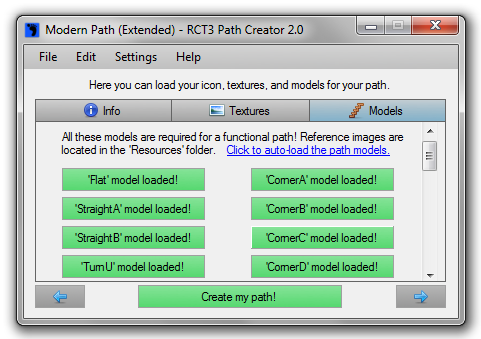 With the planet coaster .ovl files being a similar structure but obviously an evolved version. I hope theres scope in future to allow us to set flags for things like custom speakers and lights. Its nice to be able to import static and animated stuff but its somewhat lacking the full feature set that three guys (shout out jonwil, belgabor and Markus Lomberg) figured out a decade ago for what is essentially a previous iteration of this file format. In the end the CS importer for RCT3 was pretty streamlined and didnt require any cloud based processing like the TMTK does. I assume this is for conversion of the fbx and texture data into some other format with DDS textures and then compiling the ovl but this was done locally back then. Id hope in future more modification options would be opened up to allow us to define things like theme or category, custom tags for filtering and lights/speakers/custom particle effects all of which were available in rct3's engine.

So really its a waiting game until either the tmtk is opened up further or until some more time is thrown at developing a third party compiler based on the current cobra ovl extractor information and what data can be understood from the hex data. It has been done before, no doubt itll be done again but with a little more dev on frontiers side i think they could have a very futureproofed game with a very long lifespan. Expansions and DLC wasnt what kept RCT3 alive for over a decade. It was entirely down to the thousands of modders creating tens of thousands of custom content packs allowing people to indulge their creativity.

It would certainly mean people like me ,who have years of 3d modelling experience both professionally and in game modding, could make some really useful custom content.
Last edited: Apr 25, 2019

I'm all for it, but i doubt it'll happen. The main difference being control. I think Frontier is going for a particular strategy, and the engine will be bloated up. I don't think they are particularly happy with opening up the Toolkit to us, but after years of nagging they eventually gave in and are likely on a "let's see where this is gonna go" position.

As long as the Brand (Planet X) is in use and with more Planet games on the horizon i doubt they will reveal anything sensitive or "useful" to us.
The likeliest scenario, i think, will be the TMTK will become more complex (i don't see that happening in the near future though)

The reason i don't see it happen in the near future, i mean, look at what they updated in the TMTK Guide, a detailed step-by-step about adding vanilla-lights to your TMTK creation... tells me they aren't taking custom-asset too serious yet, not in a positive sense anyways.
Last edited: Apr 26, 2019

D
I’d love to see them expand the abilities in TMTK. I’m not a modeler but I know a lot of modelers from the RCT3 days that are modeling in PC run in to a lot of restrictions. For example, I believe there is an 8x8 size limit. Can’t really create beautiful foliage with that.


If the leaked roadmap is true, I hope that as they begin to shift towards a PC2, they will open TMTK to lighting, effects, custom trains, etc. one can only hope
You must log in or register to reply here.
Share:
Facebook Twitter Reddit WhatsApp Email Link
Top Bottom