Day one comes to an end. We have seen Ascorbius bowl for two hours on his stream, MalForTheWin getting addicted live on his anniversary stream, we had the BuurPit provide a stationary camera for hours on Twitch (being watched by over 20 people!), and we have - for the first time in Speedbowl history - a TIE for first place!

I am terribly excited to see who will come out ahead tomorrow!

There are far too many serious ships on that leaderboard

3 splats so far, looks like I may not finish this time.

Terrorsidic said:
There are far too many serious ships on that leaderboard
Click to expand...

I hope you're happy

I don't know who in their right mind would bowl a frigging TAIPAN all the way down from 200 km altitude. You seriously need to get your brain checked.

Only eight hours to go, this is the leaderboard - the tie is unresolved, as the podium candidates have started the great bluff of when to submit.

Too bad platform was left out of the last leader board post.

I saw this late and want to try it. I'm not all platforms, don't have enough time to try it on all three, and was wondering which I'd try.

It's a toss up between PC and PS4, we have none on XBox AFAIK. 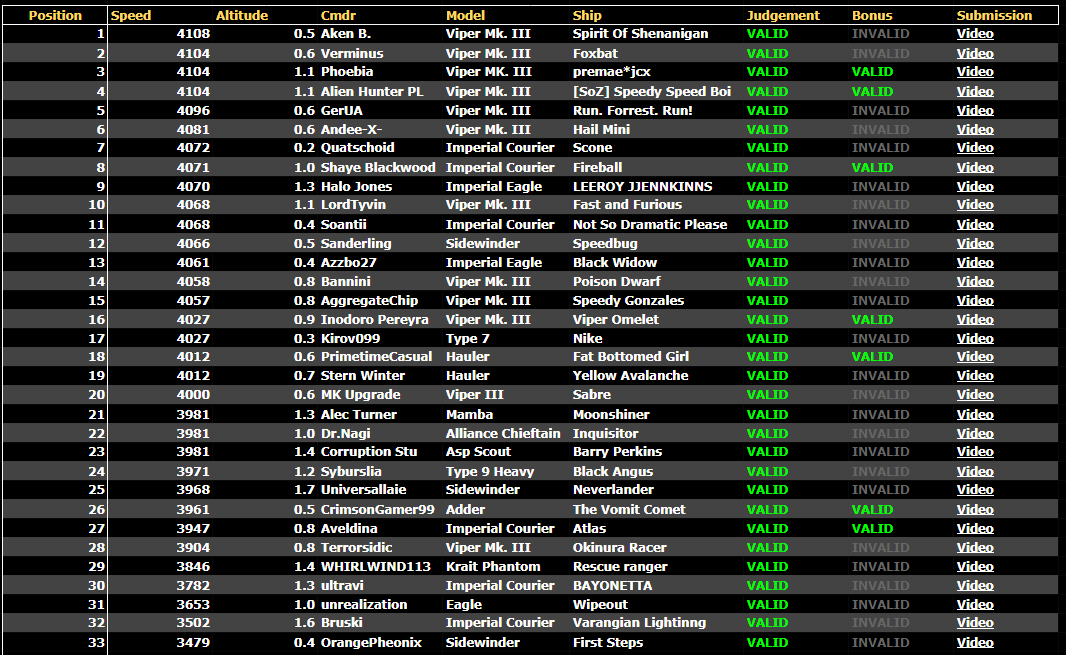 Final standings are now up: 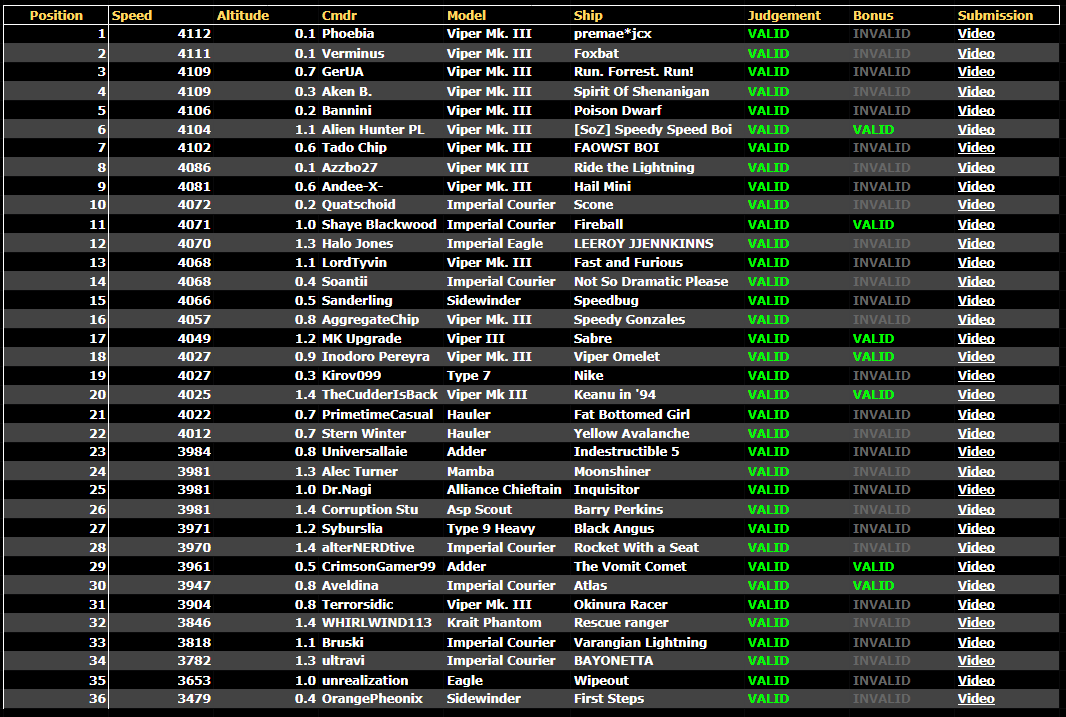 K
Thanks for putting on this event. I had a lot of fun participating.

I should be listed as #24 (well all 3 of us technically) I had the lowest altitude of us!
I claim fastest medium ship

Dr. Nagi said:
I should be listed as #24 (well all 3 of us technically) I had the lowest altitude of us!
I claim fastest medium ship
Click to expand...

Yeah, unless altitude is a secondary factor then ties should all be listed as the same, so GerUA and Aken B. both 3rd and then Bannini 5th, etc.

Just wanted to thank @PrimetimeCasual, Halo Jones and the other organisers and instigators of this event. Absolutely awesome turnout (people around in the open instance all weekend) and the overall level of competition was just incredible (so many 4000+ speeds registered!). Would love to know how many submissions you got in total and it'd be fascinating to know how many runs were attempted (for my part I only had time for 6 runs - 4 on Saturday and 2 on Sunday) but if everyone was roughly the same (or I'm guessing quite a bit higher) then we must have been looking at hundreds of runs overall!

It was so much fun sitting at Margulis watching people attempt/achieve their runs. So many explosions. So many blurs going past... and then explosions.

Highlight for me was Cmdr MalForTheWin smashing into a tower and exploding !

Nipped back to Margulis this morning to see what sort of state the place was in. Oh dear ... I hope they had good insurance! 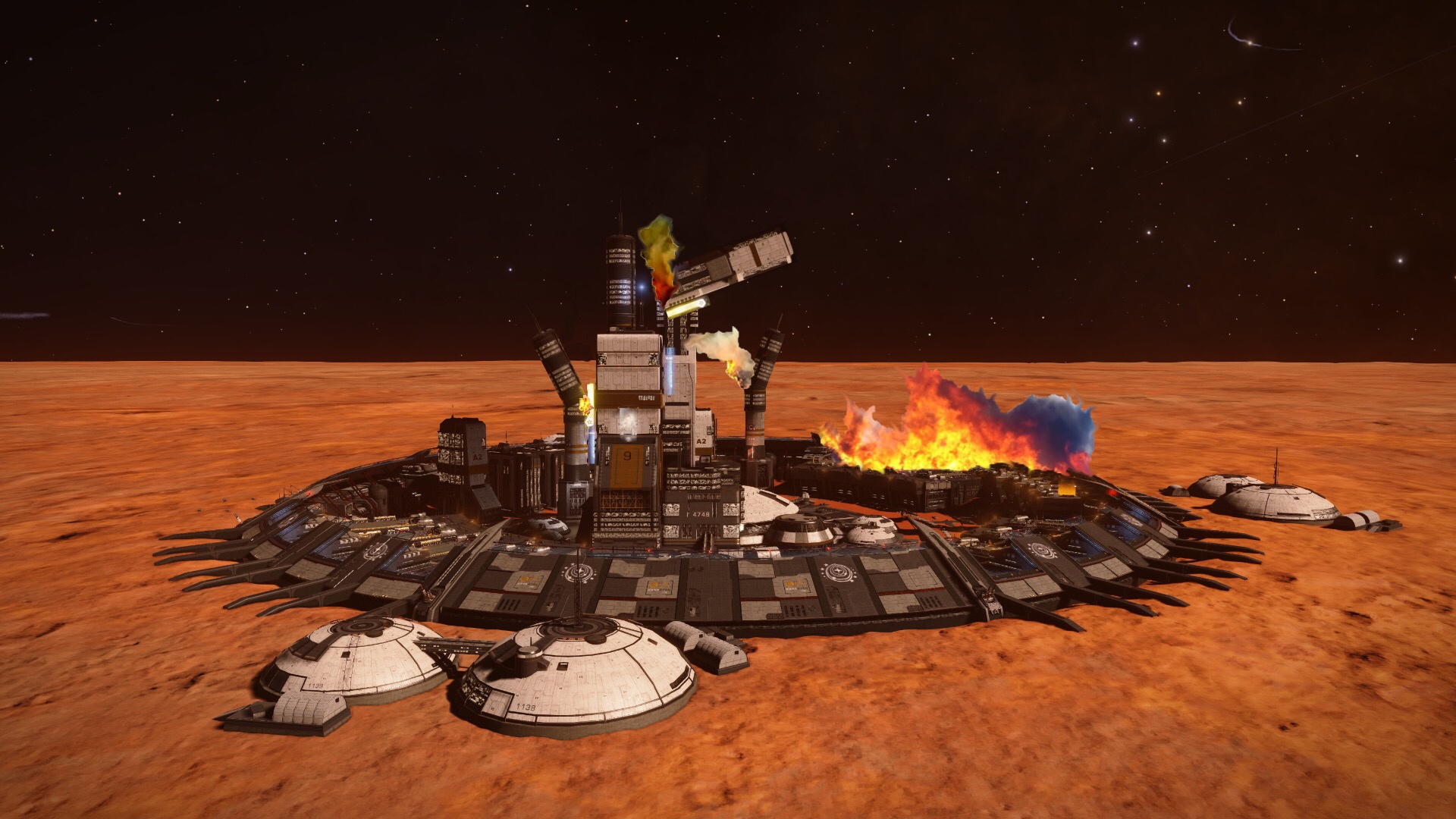 Hah, totally not enough ship remnants littering the place though. I guess they've started the clean up process...

According to my data, we had a total of 76 submissions counted, a handful graciously removed when people weren't aware of the rules entirely, at least three of four Cmdrs not turning in any but trying....

MalForTheWin was at it for hours, crashing, as were many others. I think EDSM counted over 40 shihps destroyed in that 48h period, but that's only the ones uploading their data in realtime.

I will be doing a "behind the scenes" video as soon as possible to showcase some of the work that went into it.

Thank you, everyone, for participating! I would never have dreamed of such a crowd turning up and having fun, it's been overwhelming!

For anyone who's still in a racing frame of mind, just wanted to give a quick shoutout for the next race from the Buckyball Racing Club.

The race is called "Lava Loop" and runs from the 16th to the 24th November.