But yea, I (& others no doubt) will be rattling through my candidates list for new TSs .

I've mapped them but not handed in the data yet, but feel free to if you like or I'll bag 'em later , if they haven't already been done (doesn't appear so). [update] Just about to hand the data in now.
Last edited: Dec 27, 2018 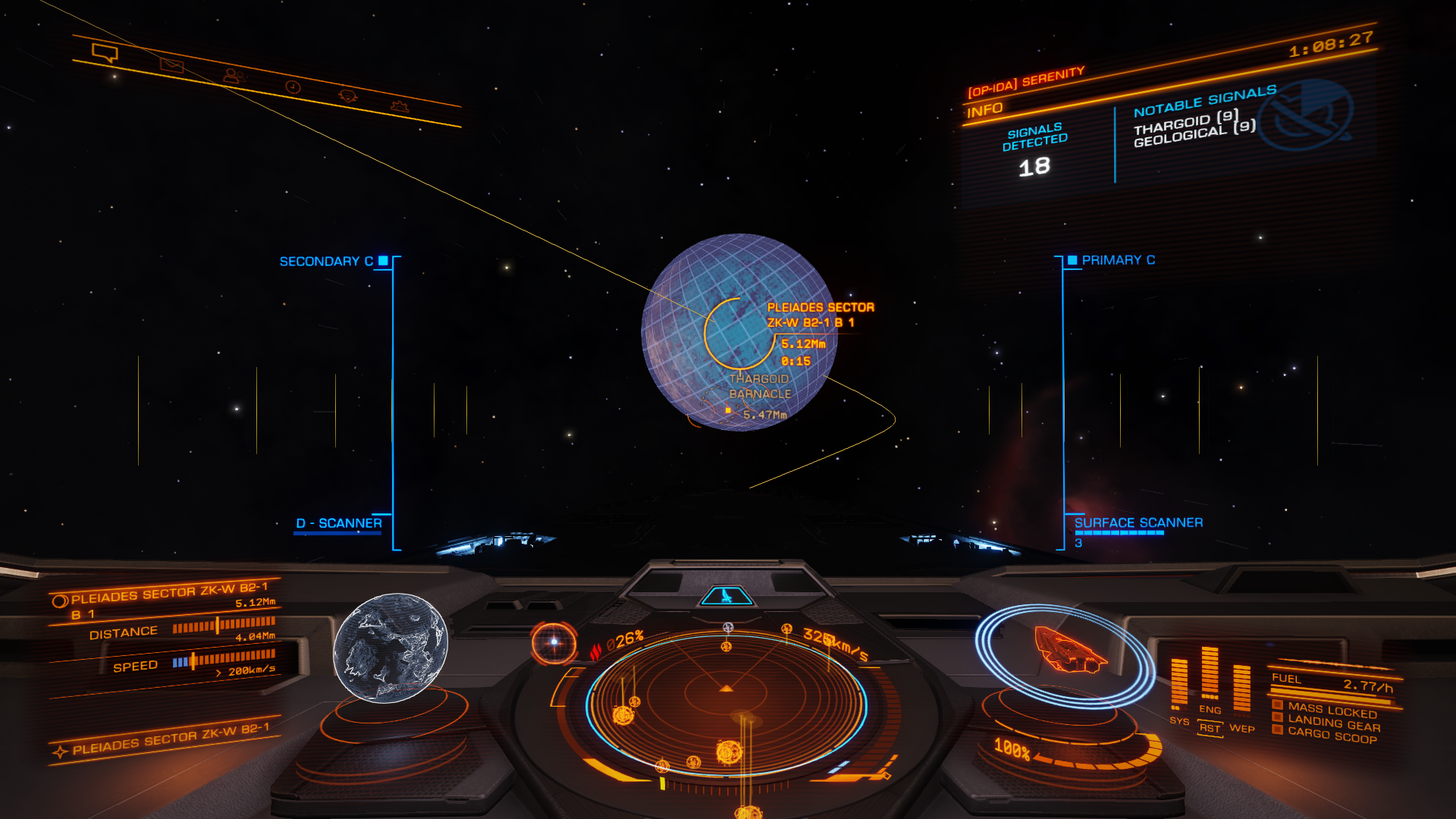 
Looking at your list of known barnacles they appear to be new sites
Last edited: Dec 27, 2018

I have spent much time investigating the clouds. Some very useful data gathered. Interesting things seen. Traveled to many nebula across half this galaxy,

but not a single barnacle out there found.

Hope you've had a good trip out there

Found new Thargoid barnacle sites at Pleiades Sector CB-N b7-0 A2, 5 site signals shown (planet A1 is a known site).
I was going to report it to Canonn, but I can't be bothered to fill in the whole form atm (& I don't know all the answers), nor do I have time to upload the screenshots tonight (got 4 out of 5 atm).
So feel free to report it yourself if you like.

I submitted 1 of the new Barnacles I found at A2, got my name in there , that one has a screenshot. Although I have screenshots of the others on A2, I can't be bothered to upload & link them [update] reported the other A2 Barnacles (less a screenshot).

Btw, I don't know if I followed a different link, but the form seemed much simpler, much better .
One thing though, at the top of the form it asks for a min of 2 decimal places, but if you try that you get an error message say 4 decimal places needed.
Last edited: Mar 22, 2019

Woah, sorry I had not noticed the activity here. New barnacles you say?

I shall get my main alt back there tomorrow I hope.
Maybe FD have added new systems which would be nice
Would mean they still have barnacle plans.

No probs, I've missed replies to threads too due to the forum change.

I've no idea if they are newly added barnacle systems, or that I'm just the 1st to discover them , the FSS makes things much easier .
Still not found a new Thargoid Structure though!

Back in the Pleiades but still busy, folk keep needing me to play with those scouts. hehe

Checked on the first of you're new systems , at least 2 of the planets anyway, passed on the B planet.

No new forest yet but i'm sure there will be somewhere.
noticing the number distribution again in that first system , sets of 4 again
and those sets of 4 have one of each size. 1MA, 2MA, 4MA, 5MA barnacle type

I should take a look at the other systems to see the numbers there. starting to think its a common pattern when in 4's.

Maybe the forests will be on far larger numbered barnacle planets. aha, OX-U C2-4 . i shall check there, 6 and 7 barnacles. curious what happens to the pattern , will it be a second set of 1,2,4,5 or will there be a 9 ( small forest ) or bigger?

i also wonder if they are new too. i do think so. certainly after december most likely as we had the new planet probes since then.

how many Meta Alloy each barnacle site has.
the single barnacles have two formats, 1 MA spike , or the 2 MA spikes with more regular spikes.

Double barnacles , they are either closer together , with 4 MA spikes, or the 5MA spike format, which are spaced further apart.

Maybe they have different functions or purpose we dont understand yet.
Then we also have the forest barnacles. Small ones with 9 MA spikes, and 24 and biggest with 35 .
All fibronachi sequence numbering.
Yet to assertain why , but if correct there should be a 15 MA medium forest i predict.

So i decided to venture myself and take a lookski around.
I dare say that FD have added some extra barnacles at some point.
hopping around undiscovered system filter ( some of which i have visited before and all non visited )
keeping within 150 lyrs or so on average of Maia/merope as middle.

Seems i have not checked many of the out lying systems, especially now we have the probe thingie.
couple of possibles, but not quite right, just a couple of viable planets.
So around 15-20 systems later , came across a nice candidate,multiple suns , many viable planets. hopes were high when i saw the system setup. Typical barnacle prime candidate.. and nobody has mapped it, so presumably its fresh. 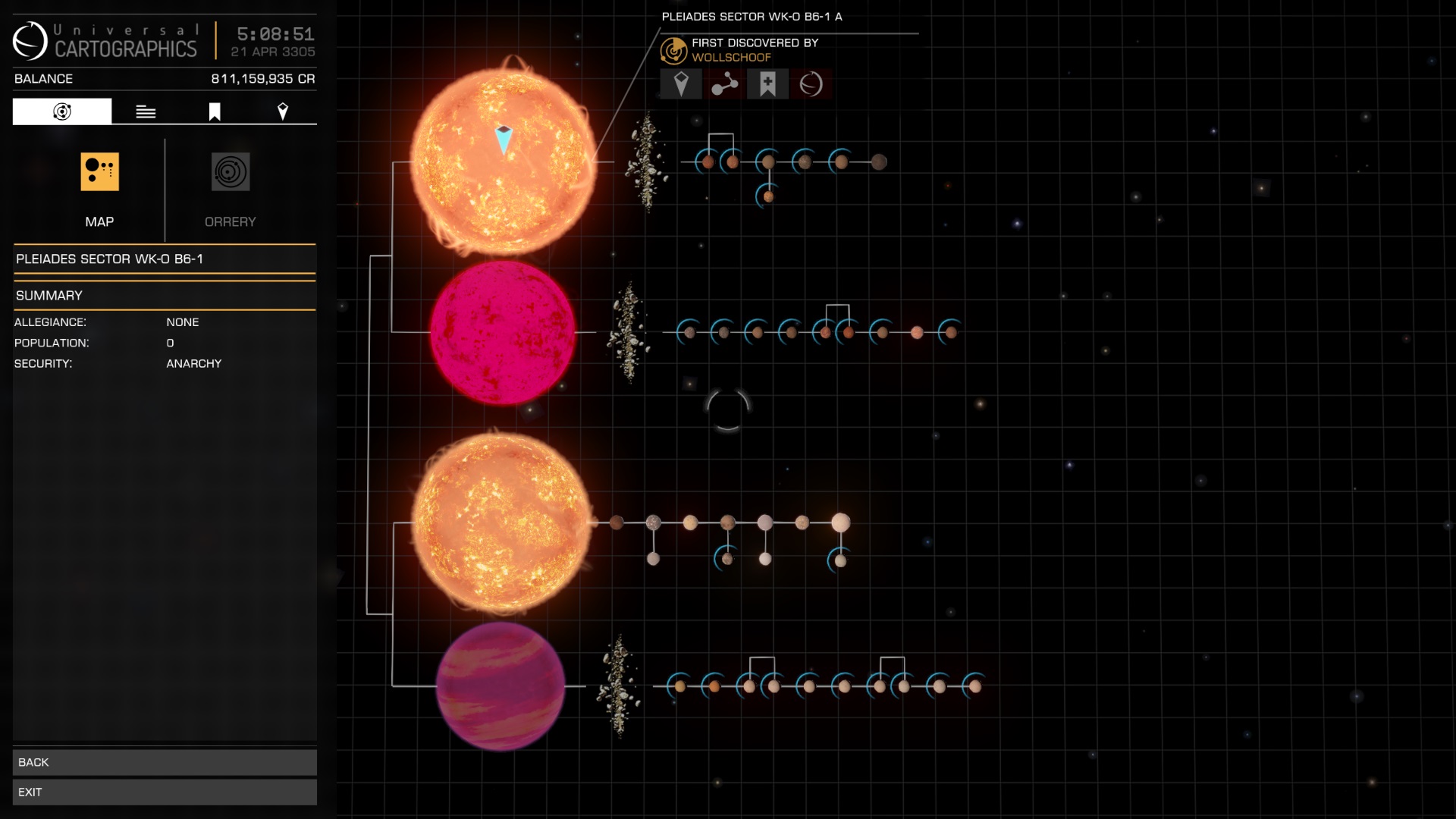 will explore more later. maybe see if other systems are now viable and if new systems are rare or just infrequent.
Last edited: Apr 21, 2019

Good to know you’re back on the case in the Pleiades.

I had to come back to the bubble on business. So no fresh news from me from the California Nebula.

But I spoke with Inhibted of the Exemplars, who took over Darwin. They’ve got a long list of Thargoid Barnacles mainly on the bubble side of the Cali Neb. They don’t share their data with Canonn, but there’s a lot out there.

Still no reports of Hyperdictions or NHSS or Collecting anywhere out there - which is strange given how many systems are now known to have Barnacles present.

I wish they’d done that back in the day. Ive got a bunch of planetary maps that use the TB number off the Canonn site.