Palin's old attacked base.
probably been there a while but the elusive goid was only noticed to be different tonight.

Palins base under attack from scouts, but a interceptor can be noticed leaving with a scout escort rapidly upon instance opening.

It has now been scanned by some fast pilots in couriers i gather, and took some time to get close ups.
some pics are circulating already but i'm sure by tomorrow better images will be around.
been attempting to get some close up video footage but tis difficult to orchastrate.

It looks younger than a cyclops, but is reported to have 5 hearts, different variant, looks similar but differences to a cyclops.
Has what appear to be Baby barnacles on its wings.

Its either the barnacle seeding ship i have wondered about, something had to place barnacles, or maybe its a baby goid grown from a barnacle forest.
the 6 large spikes around a forest megabarny, might correspond to the green pieces, wings dont have green effect as a cyclops but appear to have small barnacles upon.
reminds me of a barnacle forest viewed from above, but unearthed and alive.

Only sighted at Palins base Maia A 3 a so far, and looks like its escaping as it leaves asap with scouts.

Might see them further afield later, i hope it lives and doesnt get shot., we may see a new barnacle seeding around space .
might be why thargoids were limited by resources (MA) , now if they have a barnacle planter,, who knows.
things may get interesting soon.

Interesting ‘cockpit’ on that one.

PanPiper - are you the original sighter or is there a team from Canonn working on this?

Orthrus is a two headed dog and brother to Cerebus. 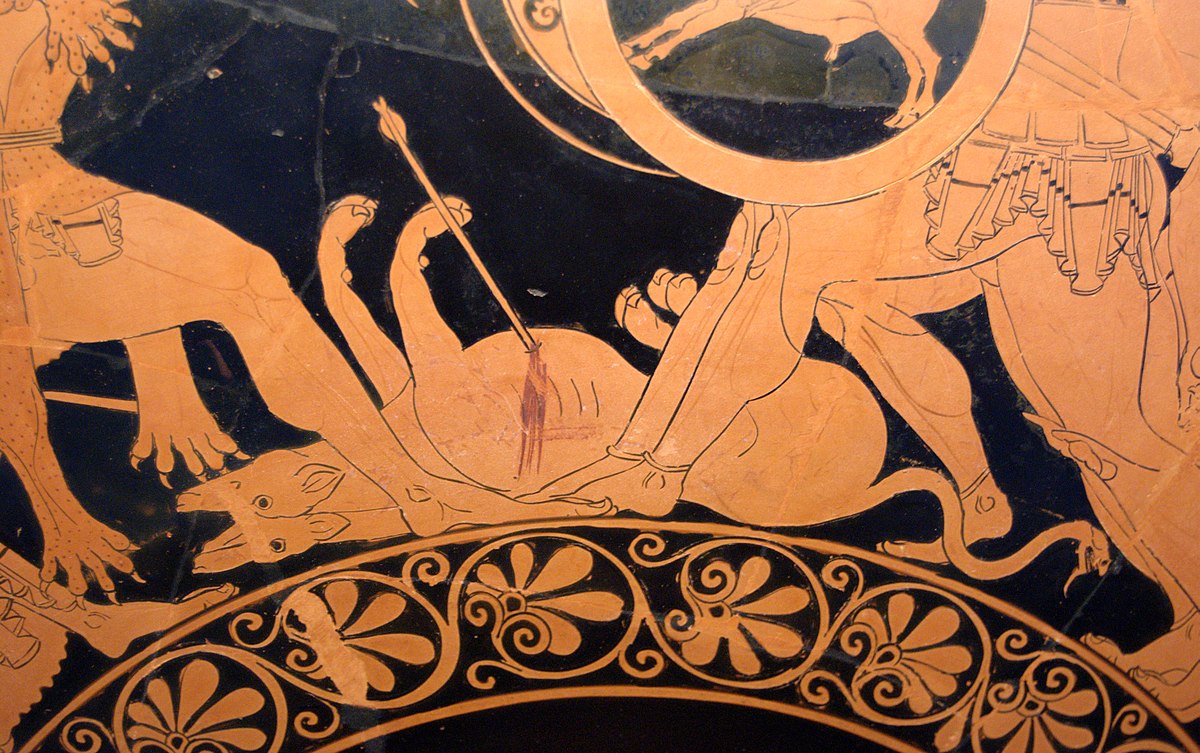 en.wikipedia.org
So apart from the Cerebus Plague, we are getting more Greek monsters coming out of the Pleiades.
Cyclops, Medusa, Basilisk, Hydra, and now Orthrus.

PanPiper, I was looking to farm meta alloys in Pleiades nebula using this - https://docs.google.com/spreadsheets/d/e/2PACX-1vS1fd3EtmsSMthxVb-PLIMFOMMmyRbEDuQLik8OoIupcQe6pTfXe6T2ssF5QKCaRZpZWyNw88UPaIp2/pubhtml# .

I went to 3 supposedly Active sites but they were all dead - broken sticks with no flowers. Is there another more updated Google sheet to use?

PanPiper. said:
Its either the barnacle seeding ship i have wondered about, something had to place barnacles, or maybe its a baby goid grown from a barnacle forest.
the 6 large spikes around a forest megabarny, might correspond to the green pieces, wings dont have green effect as a cyclops but appear to have small barnacles upon.
reminds me of a barnacle forest viewed from above, but unearthed and alive.
Click to expand...

Has anyone visited a forest site to see if anything's going on there?
Last edited: Aug 26, 2019

Well it seems those bits are not barnacles on the new thargoid, the early pics did look somewhat like them.

Better images came in later from Remlok Industries iirc on twitter
Twitter came up with several better images as Cmdrs went to the scene with fast couriers as well as an assortment of various ships.
Glitching it out was always a possibility and seems did occur a few times resulting in much better closeups.

It still reminds me of the forest layout with what appear to be nozzles, or hardpoints of some unseen type before now.
i think corrosive spray jets or something , heh.

The Palin base ( old base at Maia ) where the Orthrus so far only appears before leaving with a scout escort ASAP, looks like its escaping but who knows.

If it does spawn , at first i wondered to check on the nearby EE systems where thargoids have gathered for the last 3 weeks but nothing sighted.
Got a better idea that maybe if it would go anywhere, where else might it go?

Barnacles.
Majority but not all barnacle visits are at the Forests , so after my 101st hyperdiction ( since codex started counting encounters ) i got to the smaller forests in LY-Q B5-2
First instance at barnacle 5 planet A 3 , size 9 forest. along came a nice Hydra to visit.

Not the goid i was looking for but nice and fast it was.

I shall remain here, slowly picking one or two MA at a time, slower than allripes but just to see if the new goid comes to feed.

PanPiper. said:
Barnacles.
Majority but not all barnacle visits are at the Forests , so after my 101st hyperdiction ( since codex started counting encounters ) i got to the smaller forests in LY-Q B5-2
First instance at barnacle 5 planet A 3 , size 9 forest. along came a nice Hydra to visit.

Just noting, that's a medusa, not a hydra

What intrigues me the most with this new interceptor model is the cockpit. It feels like while the others also had something like a cockpit, it wasnt like that cockpit was meant for a human pilot, whilst this one looks more like a cockpit design with a human pilot in mind.

Wasnt in one of the previous Elite games, that we had human thargoid hybrid ships we could pilot? I have a feeling we are going to have the same possibiliy with this game.
And add to the fact, that the first sighting of this new model is above a base where they were conducting experiments with thargoid technology, it doesnt seem like a far-fetched possibility.

Witcher 7 said:
PanPiper, I was looking to farm meta alloys in Pleiades nebula using this - https://docs.google.com/spreadsheets/d/e/2PACX-1vS1fd3EtmsSMthxVb-PLIMFOMMmyRbEDuQLik8OoIupcQe6pTfXe6T2ssF5QKCaRZpZWyNw88UPaIp2/pubhtml# .

I went to 3 supposedly Active sites but they were all dead - broken sticks with no flowers. Is there another more updated Google sheet to use?
Click to expand...

Pleiades Barnacles are still behaving strangely. Majority are broken, not all but the allripe ones appear to have become cyclic , at least in behavior.
Not regular changes either but some did ripen again.
Some systems are totally broken, others have a few which are still allripe.
Not been documenting those lately until a new pattern emerges or something new develops with the barnacles.
Cyclic barnacles in Pleiades are also depleted.

California and Witch head barnacles remain unchanged, all are cyclic.

For the Pleiades there are a few systems of Allripes which did not get affected.
Could be a reason they were selected to survive but most likely oversight from FD when searching for barnacles to burn in the pleiades.

HIP systems in the Pleiades evaded the massacre and remain unchanged and FULLY ALLRIPE
Still good for farming raw materials too from the spikes as well as MA.

HIP 14405 is my current favorite site to farm from. Lots of barnacle planets , so a choice of which mats to farm if needed.
cant remember which i visited , but each planet has at least 6 barnys.
( Barnacles always have one of each setup 1,2,4,5 MA . so for every 4 barnacles on a planet there will be one 5MA double. 8 barnys= 2x5MA 2x4MA etc )
At least two or more other HIP systems in Pleiades but less convenient.
Last edited: Aug 27, 2019

Does this look dead or cyclic to you PanPiper?

Witcher 7 said:
Does this look dead or cyclic to you PanPiper?

I'm back on the barnacle case now since wednesday.

So i took the observations of last few weeks around the Pleiades to check up on a confirmed and checked allripe system over a barnacle tick.

Cycle B was near ending then , and i had come across another new system with barnacles.

The old barnacle metasheet no longer has enough data input to keep up with discoveries as it is all manual input.
It still is a good source of data and relevant infomation, less so in the Pleiades now with the changes,
but still holds true for all the finds in WH and California.


Since many of the EDMC plugins, or EDD or any of the others which gather reports automatic , searching through the metadata in EDSM has proven useful to myself to track system locations, which is all we need these days since its easy enough to log a system ,planet ,then barnacle number , MA number. then Cycle if still applicable.

Quite suprised me a few months ago, finding several new barnacle systems in the Pleiades through EDSM, as well as finding a few new systems by exploring. Shortly after no new reports or finds were coming in.

Lately i was exoploring unvisited in filters around pleiades, and came across a barnacle system.

wasnt in the old metasheet, also was not on EDSM yet either.
Systems around here are already mapped from far earlier, i suspect there are several more barnacle systems added in last few months.
Canonn plugin tells me to patrol a system nearby to me for barnacle checks in another unlisted system, but they did just add a ton of new reports to the patrol lists the other day. Seems EDSM doesnt have the full data yet.

my shorthand notes for the systems, checked every barnacle in the first during cycle B.
( PS - Pleiades Sector #xb number of barnacles b# barnacle number )

4 ripes in the system , A 1 is nice barnacle 6. 5 MA . and it seems cycle ticking to C didnt change anything.
( at least barnacle 6 is still ripe with 5 MA , didnt check on the others to make sure the others conformed, time limited , later )

Last one i came across, not in EDSM or metasheet, EDMC patrol did list a similar system nearby with barnacles unlisted.
was aksi a CL-Y D another number , i forget.
PS CL-Y D44 Cycle C

If they dont change . will just have to track which systems and which are healthy.
Was quite easy , last day and a half 3 barnacle systems in Pleiades i had not visited before.

i recon there are several more. will check over the next week

PanPiper. said:
Well it seems those bits are not barnacles on the new thargoid, the early pics did look somewhat like them.

It still reminds me of the forest layout with what appear to be nozzles, or hardpoints of some unseen type before now.
i think corrosive spray jets or something , heh.
Click to expand...

Barnacle patter definitely, but check the shadows and cracks around them.
Those looks like Thargoid was laying down on barnacles (seeding ?) and those spikes got stucked into him.

almost forgot, list of Pleiades barnacle systems from my searches.
Incomplete as at least 2 other systems will add later when time.
working in the morning.
back soon.

@PanPiper. Many thanks for this thread as I needed a heap of meta alloys today and this saved me much time.

So many new barnacle systems it seems over last few months.
Visiting many to log where the remaining or surviving allripes are.

Mostly interested in the changes that affected the allripe systems. anything post 2.4.
previous to allripes there were 6 pleiades systems with cyclic barnacles.
Allripe systems which came after used to never give barnacle scan data packages, or have cycles. All were ripe.

Since the changes, allripes are mostly broken. not all.


its still ongoing studies, but from results so far,
gathering data shorthand on the new systems for now.
around 90% of the barnacles in allripes are now dead, with a few surviving in each system.
anything with 4 has always been dead. so far only surviving ones i have found have been on bodies with 5-8 barnacles.

it seems the first set of 4 will always be dead. the second set has a low chance of a ripe one remaining allripe.

logging the systems for now since they dont appear to be cycling and stuck in their current phase but they were assigned cycles even though they dont cycle since they do now give a lot of varied barnacle scan data packages from using the data link scanner on a barnacle.
You must log in or register to reply here.
Share:
Facebook Twitter Reddit WhatsApp Email Link
Top Bottom