.....and winners have been contacted! Congratulations to the winners and to all that participated!

Now that was a Buckyball Race we won't be forgetting in a hurry!

Just awesome!
Thanks again to our host @Dr. Nagi for running this while on holiday! Applause for the ongoing work of the Hull Seals (Arf!),
and congratulations to @Darplata94, @Shaye Blackwood and of course @Bruski for their richly deserved wins.

For those mourning the loss of numerous ships I refer you to the tagline underneath our logo on the Buckyball beer mat! 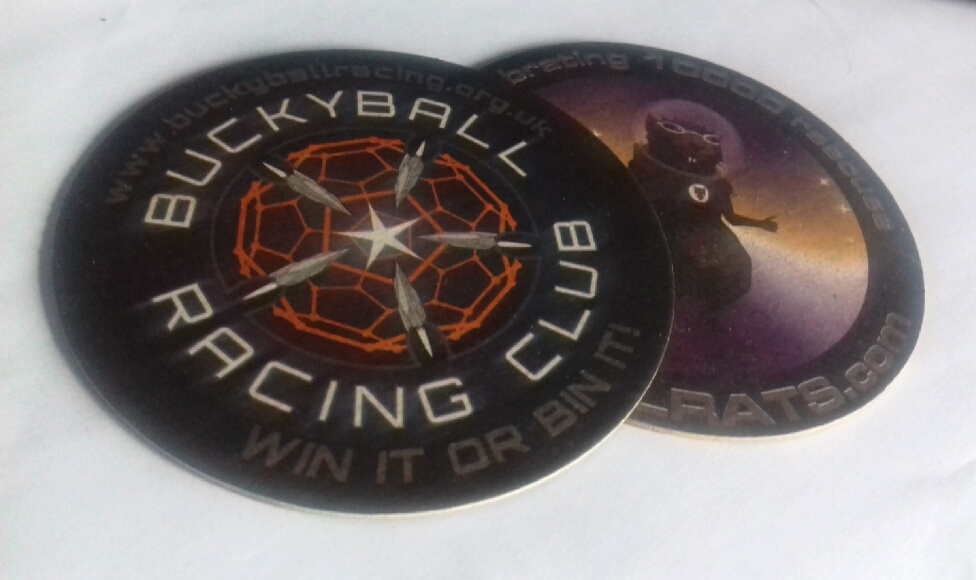 I accept the losses as badges of honour..if u aint broke it u aint trying hard enough!!!

I guess I was trying hard enough

Why do I suspect that you ain't joking about that. Holy crap ... that's some serious trying you've been doing there Cmdr Sulu! o7

As usual, a lack of solid, uninterrupted, and most importantly undivided attention playtime pretty much meant my strategy was, “No plan? No problem*!”

For the fish, I pretty much went into the galaxy map, filtered out everything but Agricultual worlds, plotted a route, and bookmarked the last jump in the sequence. If I’d been thinking, I would’ve used a reverse route, but it pretty much turned out to be one jump away.

_
*Stevenson Whirlwind Adventures, and it’s parent company Stevenson Enterprises, Ltd, does not recommend this kind of “plan.” Fail to plan? Plan to fail!

Thank you, Dr. Nagi, for this interesting race. It feels weird deliberately damaging my ship when it doesn’t involve trying to shave off a few seconds off my jump times. Unfortunately, my few Bonus Regulation runs all finished in a fiery ball of burning wreckage.

I also appreciate the opportunity to use equipment that I haven’t used before, especially in an unconventional way.

I really need to get my main back to the Bubble sometime this year so I can participate in the Unlimited races again. Currently Beth doesn’t have a single G5 FSD, and Inga has many.

S
Unclenches Was fully expecting a run from Brusky knocking me off first for regulation bonus as well.

Adding my thanks to Dr Nagi for creating this madness. I'm quite new to buckyball but this is easily the most complex race I've been involved in so far. Congratulations to everyone that participated, may your wallet refill quickly.

On to the promised post race analysis.
Preperations:
On reading the rules I immediately wanted to run an Anaconda for the unlimited class, I like big ships and suspect there wont be many chances to race them. Initially I didn't have any plans to compete in the bonus class but some time off work suddenly popped up so why not. This is roughly how I went about preparing.

First I bought a new Anaconda and engineered it as I didn't want to strip down either of my existing ones. Imperial Courier was already built and ready, just needed some tuning (in its final iteration, mine keeps its 885 m/s top speed with 4 tons of cargo). Next the regulation Dolphin joined the fleet in case I found time to run it.

I also set up bookmarks for all the waypoints except the station to buy fish, added several of those later on.

Plotting the route:
For the Anaconda I built it around the 75,73 Ly jump from Arjung to Kerurukamar, calculations showed no saved jumps increasing it even to max jump range from this.
For the Courier I wanted to keep the amount of jumps from Oppidavasti to Arjung at 5 and Maya to Oppidavasti at 6. This provided some challenges with heat management and keeping enough shields to not blow up too often, I did not get this nailed down until friday and actually only had 2 completed runs in this build.
I first went to eddb.io and made a list of all the stations selling fish that were located rougly between Oppidavasti and Arjung. Then I added their galactic coordinates for calculating distances and estimated number of jumps both to and from each one. Next up was visiting all of them to check for asteroid belts and how many planets were in my way. Entering the jump range (both from Oppidavasti with 1 ton of limpet and to Arjung with a total of 5 tons aboard) would give me candidates to go and check in each ship.
I had to redo this for every time I made a change that affected the jump range on the Courier. 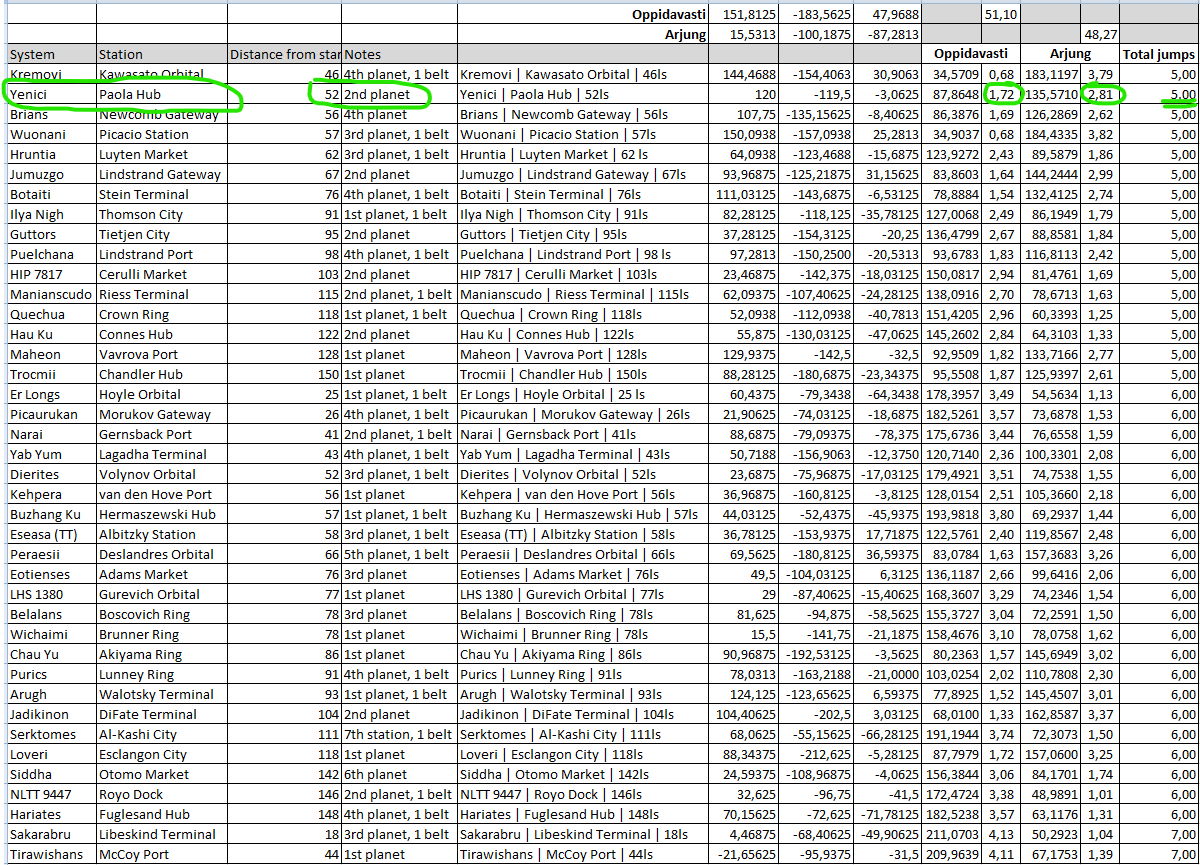 Nice! One takeaway I get from that is that, by plotting next route during SC to a station I guess that gives you an early indication of whether you NEED to refuel at station or not. By not doing this I ran the risk of finding myself with insufficient fuel to jump on leaving a station so always played it safe and refuelled.

S
Refuelling at the stations doesn't add more than a second anyway, it's a good investment. Preselecting the next waypoint burnt me a few times in Arjung though with the Anaconda, as I couldn't actually make the jump to Kemurukamar in one jump until after I drop the fish. Several times I forgot to reenter galaxy map to replot before jumping

I must admit I tended to take a hybrid view of this...always take on half a tank which gave me 2 jumps. Only looking ahead if I had 1 jump or less onboard.

This was a real blast guys, I look forward to giving these ago again in the future!!

Thanks to Dr. Nagi for hosting this great race and congratulations to the winners.
Unfortunately I didn't have time for more than one run per workday morning - not that it would have made a lot of difference
Looking forward to the next one.

I'm quite a noob when it comes to racing, but this was very interesting and very fun. Thank you Dr. Nagi and congrats to all the winners! Until next time o7

Thanks Dr. Nagi!! Excellent and very educative race.
Congrats to the winners!

The results have now been posted to the Past Events section of the official Buckyball Racing Club website: http://buckyballracing.org.uk/

We don't currently have any other races on the calendar so if anyone has an idea for one and fancies running it in a month or so then hop onto our Discord (link on the website) and let us know.

Massive thanks to the Hull Seals and @Drebin Omega in particular for what arrived in the post yesterday! 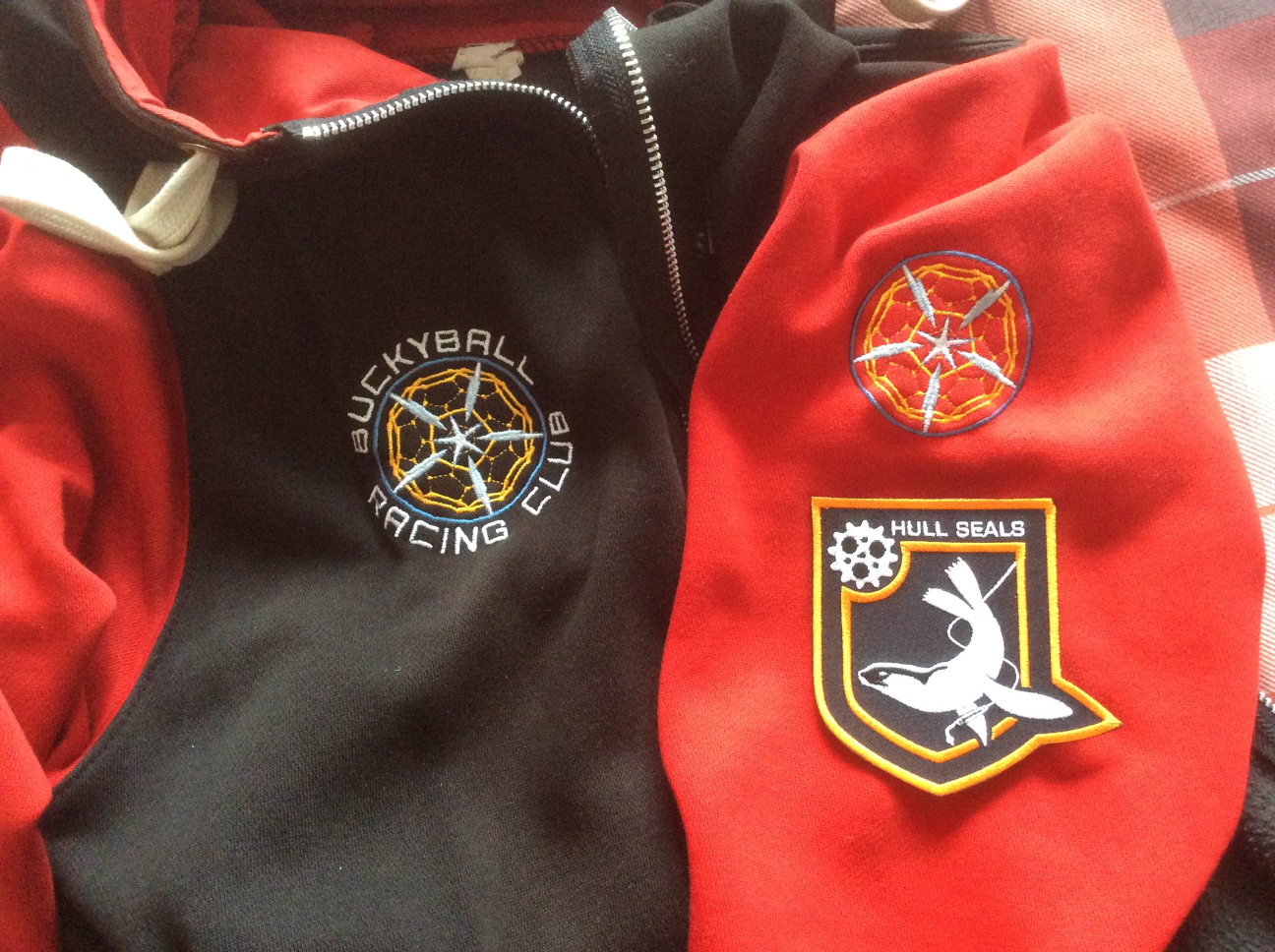 Looks fantastic! Either gonna put it here on the Buckyball hoodie or else on my jacket.