Pulling Back From the Edge 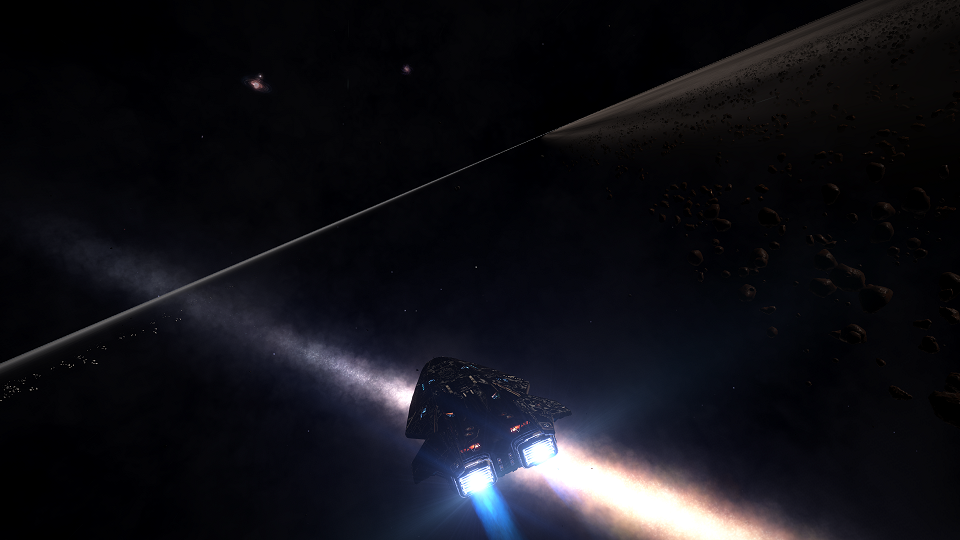 After finally getting the cockpit control system repaired, the first destination was my guide star, Myeia Thaa UX-L d7-2. I hadn't visited this before going out to Ishum's Reach, as I'd just picked it as being on the direct line back to Sol. However, I was delighted to discover that although the primary had been registered, the secondary star had not. It was the first discovery that I registered the moment I had access to Universal Cartographics: 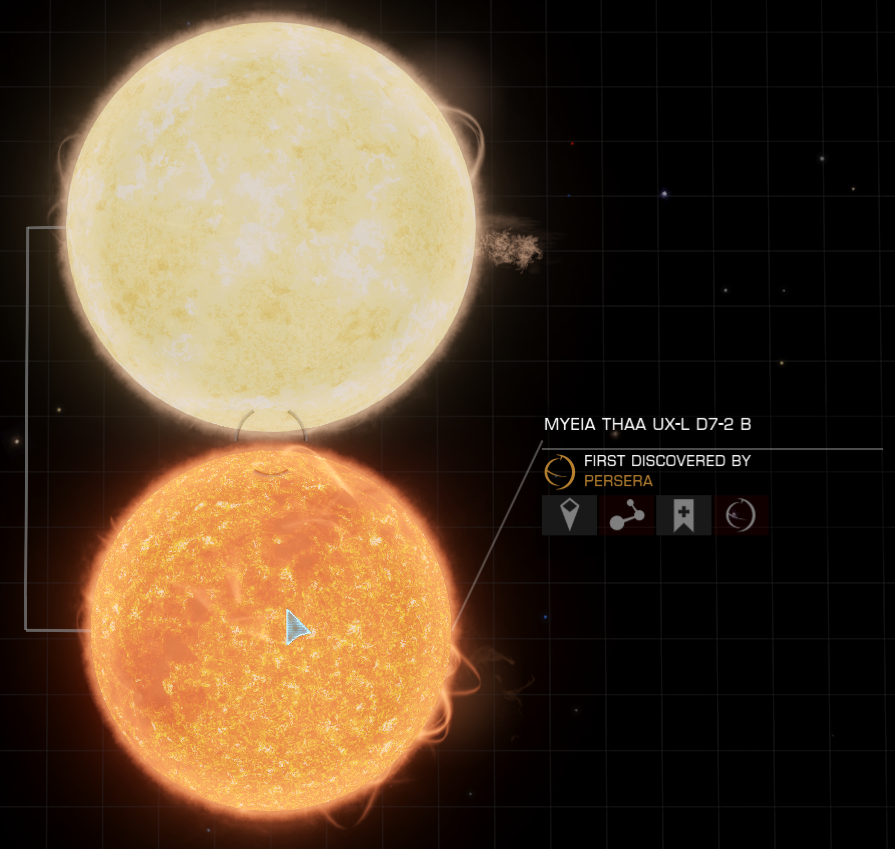 Around that time I caught wind of CMDR Deluvian's second record attempt, so I went back to Ishum's Reach to witness that.

After that my fighter pilot Sabrina and I started exploring in earnest. That particular area was pretty thoroughly surveyed, so instead I headed back a bit to where I'd bookmarked a field of single star nebulae, hoping to find one that hadn't yet been discovered, and was delighted to find several. In more traveled parts of the galaxy, these are usually already discovered.

I'd gotten so used to the emptiness near the edge, heading back towards the core was almost a shock to the system.

The rest of the return journey to Colonia was dedicated to nebula hopping. In the end I think I visited a dozen different ones. But the best find of all was what I came to call The Dried Blood nebula, because of it's designation (dryio bloo) and it's deep red color: 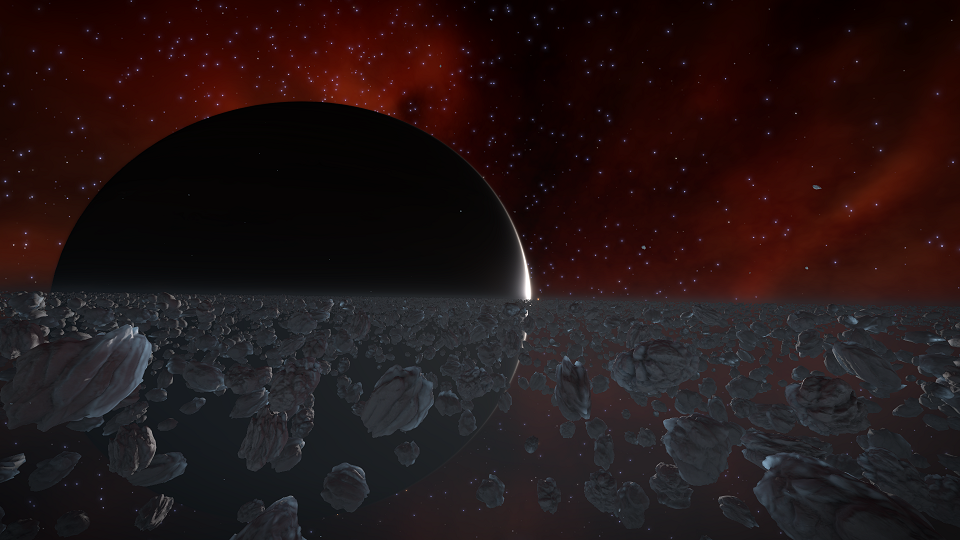 A lot of it hadn't been surveyed - rare for one of these larger nebulae, but that may be partially because there seems to be an issue with the galaxy map - it wouldn't always show up unless you were looking from the right angle, or were right at it. 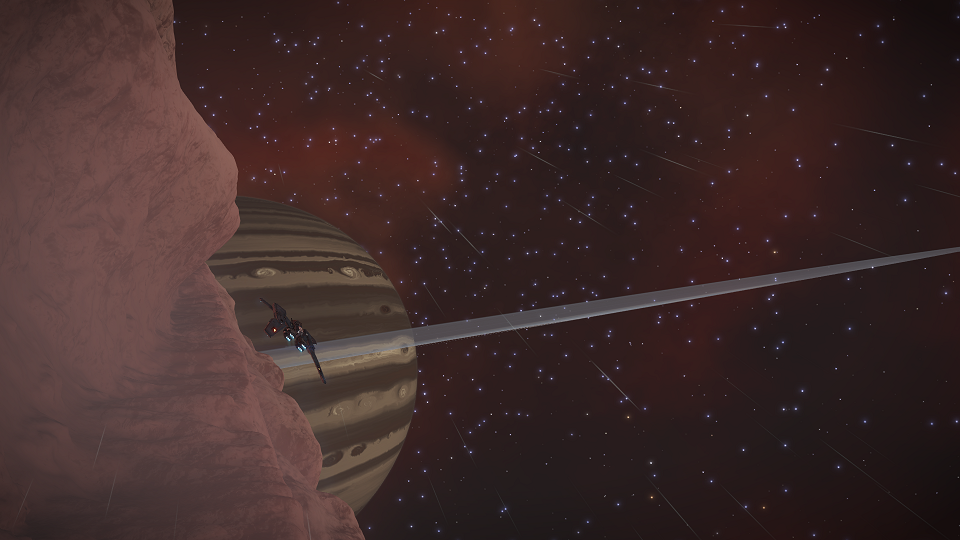 At first my plan was to try and survey it completely. I was hoping that by bookmarking every black hole in and around the nebula and then zig-zag between them with economical route plotting enabled. After about 40 or 50 systems completely surveyed, every star, planet and moon I found I'd hardly made a dent in covering the whole thing. So I did some back of the envelope math. If you model it as a sphere, I estimated that it was at least '10 systems' in radius - i.e. the average spacing of systems meant that you'd encounter about 10 stars from the center to the edge with economical route plotting. Sticking that into the volume of a sphere formula you get: 4/3 * 3.14159 * 10^3 = 4188 and change. And I think that was a conservative estimate. So yeah, I'd need to spend around 100 times longer then I'd already done to survey the whole thing. So after that I turned of economical plotting and just finished off visiting all the black holes I'd bookmarked. 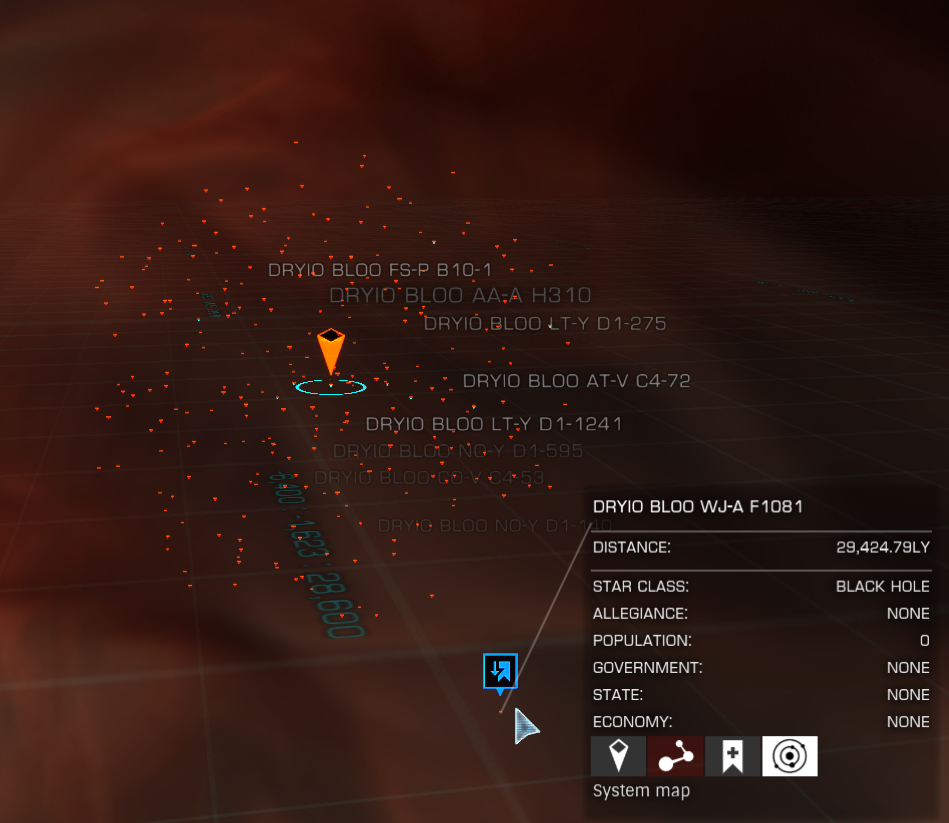 A week of traveling and few nebulae later and we were finally back in Colonia.

While the Rough Landing was back in dock for a proper repair after our little (mis)-adventure, Sabrina and I switched over to the Jack of Flames to finally start to make good on my vow to Flora. But I somehow couldn't devote myself fully to the prospect. My journey home wasn't really done. And hadn't turned in most of my exploration data - the plan is to sell it mostly in Mischief controlled space (Unfortunately it was only later that I (re?)discovered that there's a Fuel Rat faction out in Colonia).

Persera said:
https://i.imgur.com/xjGhRsH.pngSo it was back to the Rough Landing, and back to the bubble.
Click to expand...

Those of us still out in the black are following your epic tale with great interest. I was going to joke that I hope my expedition through the Perseus Arm is half as epic as your trip, but I frankly don't want to get stuck with no fuel in the middle of nowhere

Btw, RVs? As in big campers?
Click to expand...

Yes, RV's as in Recreation Vehicles. Mount-it sells all kinds of mounts but these seemed the biggest bang for the buck as opposed to PC and laptop articulated mounts for cars that are expensive.

This journey is drawing to an end. Sabrina and I are back in the Siderea Balneus for the last stop of the trip: a return to Hutton Orbital where it all began.

On the way back to Colonia we actually followed the Enigma Expedition in reverse. My thanks to the organizers for putting together a spectacular collection of places to visit.

From the Gas Giant locked in a death spiral with a Neutron Star: 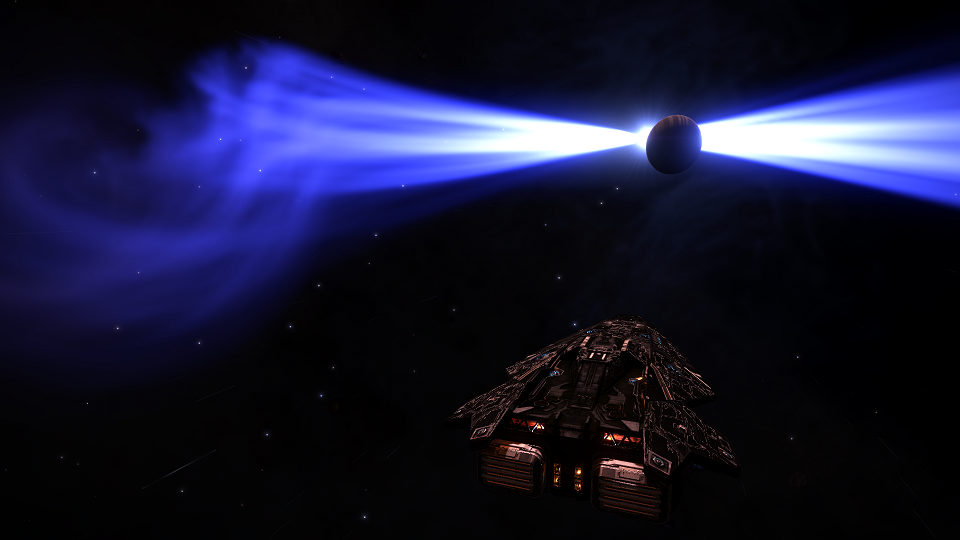 To the enormous rings of Heavan's Lathe: 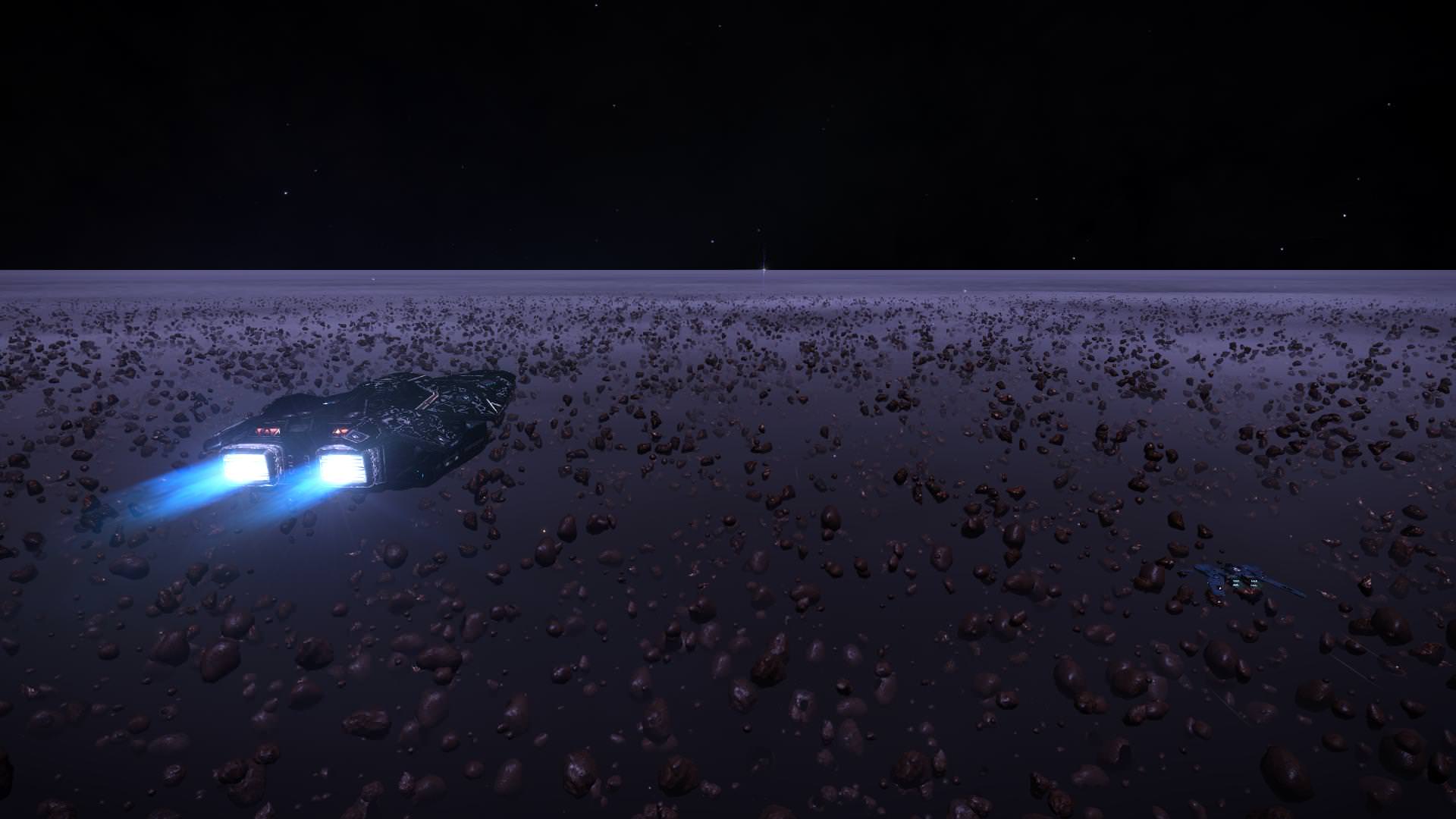 There's a nice mix of places, and several of them quite close to the few stations dotted along the route. Probably my favorite of those is Sacaqawea Space Port: 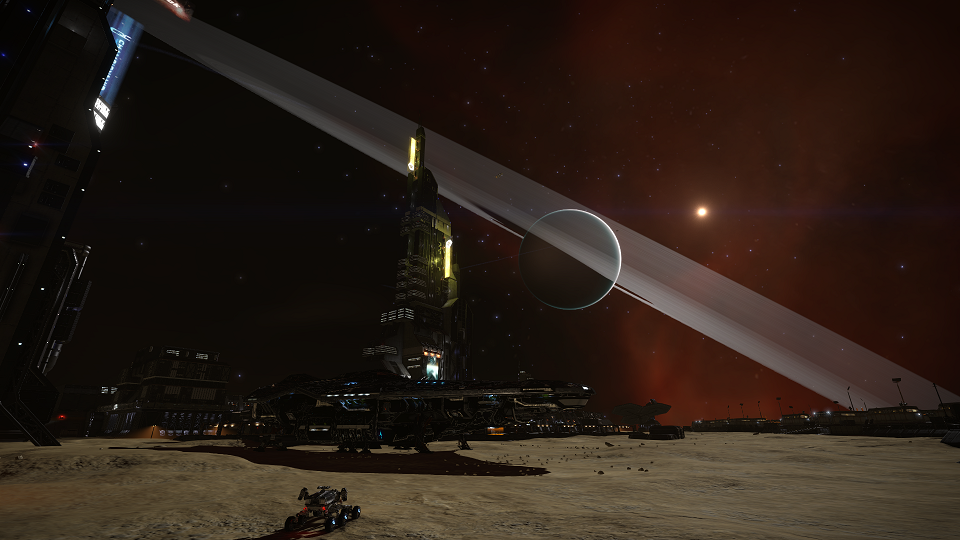 Which is in the same nebula as the Skaudai Guardian Sites: 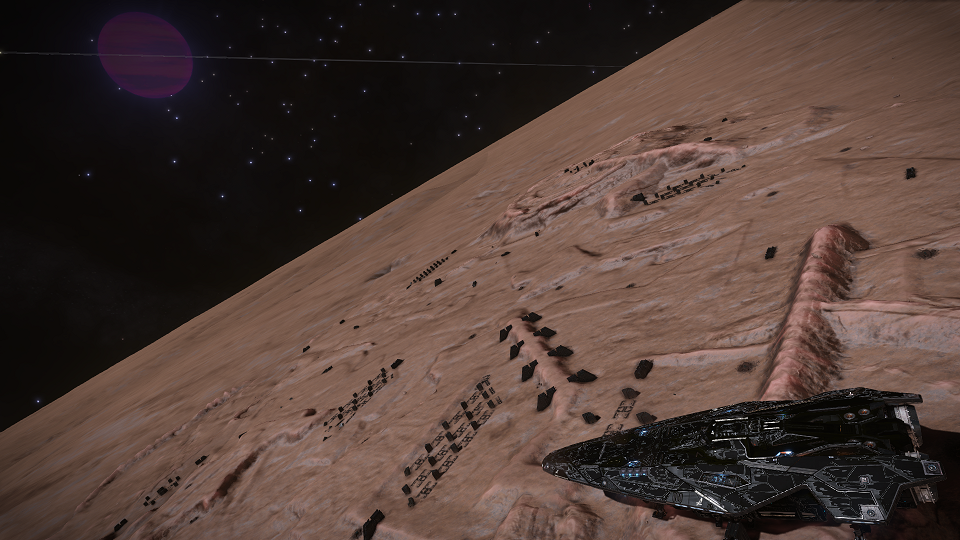 Along the way you might even find a few things no one has ever seen before. This ammonia world was a pretty sight: 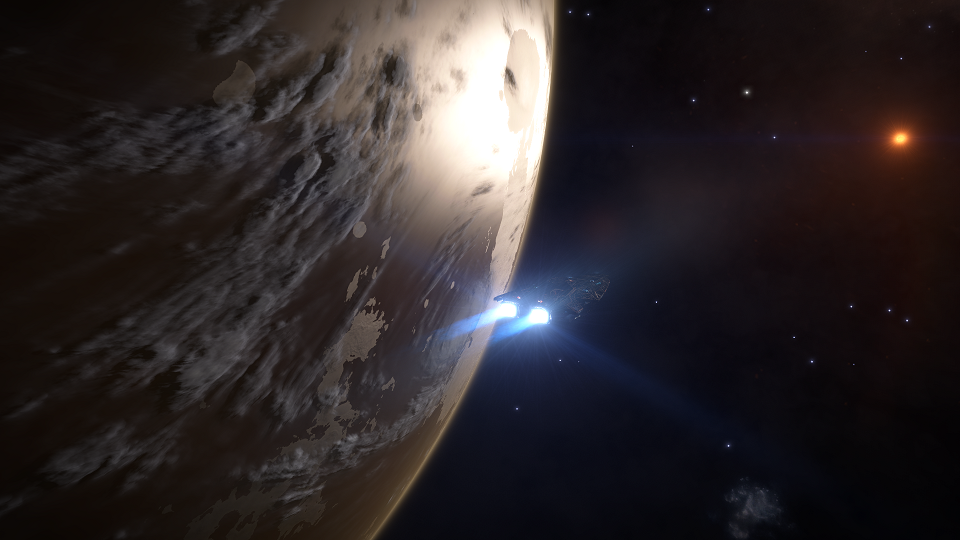 With everything that happened, and with the massive haul of exploration data, I decided to contact Iridium Wing for an escort.

It was well worth it, despite the inconvenience of having to schedule a rendezvous 24 hours in advance.

Coordinated by CMDR Sclooch with CMDR TrekkerVE navigating our route, and CMDR Doc Lentz scouting ahead we thankfully encountered no hostilities and I was able to visit Sopwith Horizons in Cimih and then Wolheim Vision in Fuelum to sell over 200 million in exploration data. There was one minor incident of note. As CMDR Sclooch noted in the offical report: "Trekker's cat stowed away in Trekker's cockpit. He heard we were flying to Rat Space and was hoping for a snack. No rats were encountered and the cat came away hungry."

They were complete professionals and Sabrina and I very much enjoyed participating in coordinated ship maneuvers, especially after so much time out there with just the two of us. My sincere thanks to them and I heartily recommend it for any explorer on they're way back into the bubble.

We've actually been back in the Bubble for over a week. But between spending time with friends and family, and dealing with all the things that piled up, it's only now that we've found the time to finally finish this journey. I also had some really weird dreams. I was flying a ship I'd never seen before, and I was fighting Thargoid Scout ships right in the heart of the bubble. Plus I knew the trip to Hutton itself would provide lots of time to write this.

This morning we visited half the stations in the Sol system and a number of others nearby, so I've got a computer stuffed full of very lucrative data. This unfortunately attracted some unwanted attention, and although Sabrina and I dealt promptly with a number of them before we set off, we were altered to two more contracts against me just as we started accelerating, followed shortly by signs of pursuit. Pretty sure there still back there, though we lost the signal ages ago.

Not much chance of them stopping us though, this little space bathtub can outrun just about anything.

I have no idea what's next for me, though I expect I'll be staying closer to home for a while.

But despite traveling to beyond the far side of the Galaxy and back, it feels like there's so much more out there to see, so maybe I'll run into some of you out there in the black one day.

I really can't thank everyone enough for all the help and support in getting Sabrina and I safely back here. From the Rats who flew the long way out to rescue me, to the Iridium Wing pilots who saw to it that I got back safe and everyone in the community for their support. And to the Hutton Orbital Tourism Bureau for inspiring this whole adventure.

Slowing down now, my tail has just come back into range.

Whew. Little hairy there - made I made exactly the same mistake I made back in Colonia that lead to the loss of Flora - had my shields off so the self styled 'Lord Thlan' actually got a piece of me before I was able to low wake.

Thankfully he didn't like his chances against the orbital's defenses.

So here I am, safely docked at Hutton Orbital, just about to head back to the gift shop and the end of this marvelous adventure.

Fly safe out there,
CMDR Persera 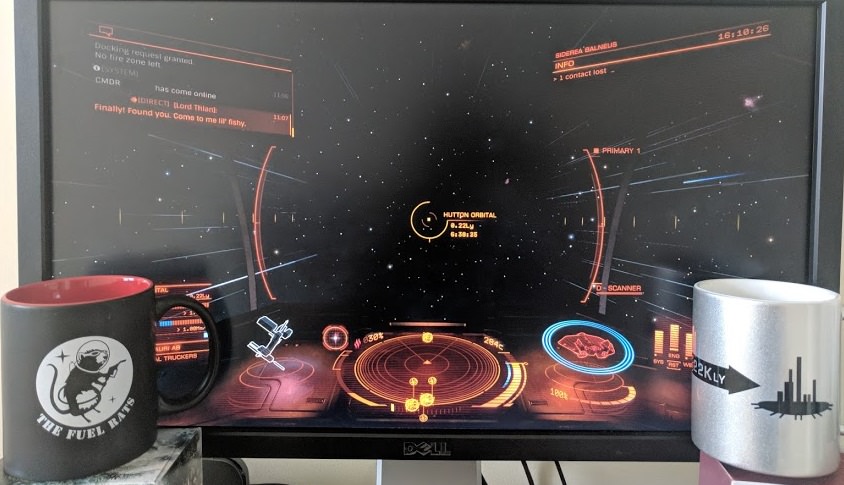 Some wicked shots , & a good end to your adventure .

T
This post is the reason I bought this game

How much of this is role play vs actual game mechanics

Tiberius J Kirk said:
How much of this is role play vs actual game mechanics
Click to expand...

Without going back and dissecting the entire OP and subsequent saga, I'd say that 75% plus is game mechanics.

The undertaking of a crazy venture, pushing further than anyone had previously in a way no one had thought of before only to miscalculate slightly and run out of fuel is completely gameplay based. As was the epic rescue mission from other CMDRs to get Persera back safely. In fact, the fuel rats have conducted a huge amount of rescues in game, it's just that most don't make the news.

T
Absolutely legendary. I cannot wait to learn how to do this kind of stuff. I can’t even begin to wrap my head around what it means to take a multi-week journey as I’m still just bouncing around my starter galaxy and what I know seems so simple compared to the talk about plotting routes and reengineering systems. CMDR Persera you are a brilliant writer, Fuel Rats you are a beacon of hope and doing God’s work, and to everyone else who plays this game, I hope to one day meet you in a galaxy far far away.