C
So I decided to go ahead and update the list of permits known so far in the game. There is quite a bit of out of date, incomplete or outright wrong information from various sources, so I decided to compile the best info I've been able to find so far. I've also found precious little information about how to actually get some of these permits (or if it's even possible at all). So if you know something, share it and I will update it. Please contribute additional permit locations, and the best places to obtain them, as well as any other relevant information (such as why you'd want to get the permit or where the ideal locations are, if any).

PLEASE GIVE ME A +REP IF YOU HAVE CONTENT FOR ME TO ADD. Naturally I'll +rep you back.

A BIG thank you to everyone who has contributed information so far! This thread has become a true community resource!

Important things to keep in mind when obtaining permits

The controlling faction is not always the permit providing faction.

You can rep up at any place the faction is at, but only systems within 15 light years of the permit faction's home system will provide the permit.

14 August 2017: I have decided to discontinue updating the rep systems by hand and instead will provide a direct link to eddb for each faction, which did not exist at the time when I originally created this thread. Credit to Factabulous on page 57 for finally for making this suggestion.

Naturally, there are still permit-locked systems out there that may yet be discovered, while there are others that should be taken off this list. I will check back every so often to see if there are any new updates. Thank you so much to people who have contributed to this thread!

ALSO! Added a community spreadsheet for you all to play with and add information to! Credit to 22tma on page 57 for the inspiration!

28 Jan 2016 UPDATE: PHEKDA is no longer permit locked, as per the latest update as of 27 January. (see https://forums.frontier.co.uk/showthread.php?t=227540 ) Therefore it has been removed from the list.

Tips on getting allied quickly with an Independent Permit faction

5-7 million credits dumped at a station OWNED by a permit granting faction gets you to allied quickly. So take that trip to Sag A*, come back, hit up a few hundred neutron stars, and get allied. While the exploration takes forever, getting allied will go by quickly once you get back. Just be sure to re-outfit your ship with better shields, armor and thrusters and chaff to withstand the odd NPC interdiction.
Trade

Trade is also an excellant way to get to allied status while making some decent money. Here are some trade routes that will help you get allied.

In preparation for the Horizons release, I have listed a NEW section related specifically to permits related to planets! Please submit your findings in this thread, and anything you know about the location!

4 SEXTANTIS
Rep Systems?
Rank: n/a
Note: As per FDEV support on (referenced on page 57, thanks CMDR LeinhartKUF!), this system is deliberately unattainable. It is possible to see the permit, but ranking up to allied with the 4 Sextantis faction that gives it makes the permit mission disappear. Again this is not a bug, but FDEV's way of locking this system for a future content release.

Note: No special benefits known so far for above Empire systems, but community goals have been known to occur in permit-locked systems. Benefits of ranking up with Empire includes access to the Clipper, the Cutter, the Imperial Eagle and the Courier.

CD-43 11917
Rank: Must prestige on CQC at least once by getting to rank 50 and then resetting back to rank 1
Benefits: With access to Attilius Oribtal you'll be able to take advantage of a whole host of discounts, including 20% off certain ships such as the Fer-de-Lance and the Vulture, 50% off chaff and heatsink launchers, 30% off most small and medium weapons and more. Source: http://us2.campaign-archive1.com/?u=dcbf6b86b4b0c7d1c21b73b1e&id=413c006bf1

TERRA MATER
Faction: Brotherhood of Terra Mater
Rep Systems
Benefits: Gives you access to the rare good (Terra Mater Blood Bores). What's so good about Blood Bores you ask? It makes you super strong at the risk of completely destroying your body if you over exert yourself by accident. Very handy if you find yourself in the middle of a bar fight against 3 Federation bouncers who disagree with your pro-Empire politics. Source
UPDATE: Hecate no longer controlled by the brotherhood. But if you are so inclined, please help them get back into power in Hecate to help fellow permit holders.

JOTUN
Faction: Dukes of Jotun
Rep Systems
Benefits: Access to Rare Good (Juton Mookah)
Note: Blanquichu has a HAZ RES where you can boost your influence.

CROM
Faction: Crom Silver Boys
Rep Systems
Benefits: Access to Crom Silver Fesh rare good. Silver Fesh is a variant of the synthetic psychoactive drug based on a closely guarded secret recipe. While active, it causes the user to lock their teeth together and rapidly exhale, a reaction that led to its street name, Fesh. This variant was created from a stolen recipe for Wolf 1301 Fesh and is the closest Fesh variant in terms of quality to the original. Banned in most jurisdictions.

ISINOR
Faction: Chapter of Isinor
Rep Systems
Benefits: "Convoy beacon" game play content. Basically there is a Type-9, escorted by two Federation security vessels (with no cargo) which holds resonating separators and a special good called "antiquities" in small and varying amounts (picture below blue note). These special goods can be sold at any black market for roughly 90k depending on demand.

UNINHABITED (and presumably not earn-able at present):

51 ARIETIS - No permit required, but system description says one is required. Example of a random star (not in Col 70 or Horsehead Dark Region tagged) in Bernard's Loop Area that is permit locked: 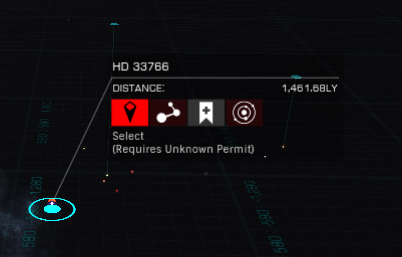 Might want to break out the anarchy/criminal systems like Phekda and Crom (69 G. Carinae, Herthe, Laifangyi, Bunuras) from the other independents, unless they're all criminal.

Apocryphic said:
Might want to break out the anarchy/criminal systems like Phekda and Crom (69 G. Carinae, Herthe, Laifangyi, Bunuras) from the other independents, unless they're all criminal.
Click to expand...

Why would that be important? I can denote that difference with a comment if it's really worth noting.

add those to areas permits

K
+rep for this, thank you. also, if anybody knows of any benefits from any of these systems, please place that info as well?

I'm not trying to be a smartasp, I don't know if there are any. I only have 2 permits

I passed through the Veil Nebulae East and West and saw no permit systems. There was one in NGC 7822 when I passed through, but now it does not appear to require one. There was an entire Pleiades subsector that required them, but no longer.


CMDR Swift Arrow said:
Why would that be important? I can denote that difference with a comment if it's really worth noting.
Click to expand...

Hmm, I suppose it's not really.

kaaldesh said:
+rep for this, thank you. also, if anybody knows of any benefits from any of these systems, please place that info as well?
Click to expand...

Not at all that I've seen. It would be nice if the military systems stocked superior modules, for example, but such is not the case.

kaaldesh said:
+rep for this, thank you. also, if anybody knows of any benefits from any of these systems, please place that info as well?

I'm not trying to be a smartasp, I don't know if there are any. I only have 2 permits
Click to expand...

I do think you raise a valid point. If you only care about getting a tangible benefit, it would be relevant to know this information since doing otherwise would just end up being a huge time sink vs doing other things like pew pew, community goals, trading, exploring, etc.

CMDR Swift Arrow said:
Founder's world has the discount
Sol is hand-crafted (and higher likelihood of certain events going on vs other permit systems)
A few extra possible places to do trade routes that aren't as likely to be destroyed (due to limited availability)

I do think you raise a valid point. If you only care about getting a tangible benefit, it would be relevant to know this information since doing otherwise would just end up being a huge time sink vs doing other things like pew pew, community goals, trading, exploring, etc.
Click to expand...

Thanks to you and CMDR Apocryphic for the info! Permits are still cool just because of the exclusivity though so I'll be chasing them soon

Apocryphic said:
There was an entire Pleiades subsector that required them, but no longer.
Click to expand...

I went on an exploring jaunt to the Pleiades in v1.1, and didn't notice any permit systems or areas while jumping all around the nebula. I could be wrong - my brain keeps mentioning Summerland in relation to this, but I don't remember where Summerland is, and I don't trust it. I think I visited about 10 systems in and around the nebula.

Sirius Corporation missions can currently be found in Avik and Procyon. Though I recommend Avik, as the nearest port in the Procyon system is 11k LS from the star.
Last edited: Mar 7, 2015

Apocryphic said:
I passed through the Veil Nebulae East and West and saw no permit systems.
Click to expand...

Me, too. Although I did find a bugged system.

Valethar said:
Kamba - Found near Viracocha, just outside of Imperial space.
LHS 2921 - Found near Alioth in Alliance.
Click to expand...

Is Virachocha and Alioth where to get these permits? Or just adding new permits to the list (which are now added)? The "found near" part confuses me since you can just put it in the search.

@Yabba addict you got the Juton permit? don't think many others have this one

@Yabba addict you got the Juton permit? don't think many others have this one
Click to expand...

Yeah, had it about a month now. I made a 41 stop route and hit Juton, not realising I needed a permit. Finding the mission systems was easy enough though, they were the only ones Juton trades with.

There are sections of the Bubble Nebula that require permits as well, but you can go to most of the systems there.

God knows why I worked like a ferret for the Hodack one. It's awfully quiet at the Evangelisti Settlement.