The members of the Beagle Point Expedition are saddened at the death of Stephen Hawking and will be dedicating our meet up at RENDEZVOUS POINT in honour of him this coming Saturday 17th March.

We would like to propose that a memorial beacon be added to the the Rendezvous point system above planet 5 A, the location of many deep space expeditions heading to beagle point.

Can you all please add your name below if you support this petition.

R
Considering Fisher got one I don't suspect its going to be a problem.

PK555
He gave so much to science and will be missed.

I’ll sign it. CMDR Bryan K. A better place would be in orbit of a black hole, though.

While I think he deserves more than a beacon, no reason why he can't have a nebula, a megaship, a planet, a station, a black hole and a beacon too.

Put my name down for this one.

I would very much like to see Stephen Hawking honored with something in game. He was an amazing person, not only defying the odds given to him with his medical condition, but also giving a massive contribution to science and knowledge that could never be overstated.

So sad to hear, but the Man did beat Dead for much longer then anybody told him he could. RIP


Bryan K said:
I’ll sign it. CMDR Bryan K. A better place would be in orbit of a black hole, though.
Click to expand...

My tought exactly, if we put something in his name in the game (which I do think we should) then do it around a black hole.

Wishblend said:
We would like to propose that a memorial beacon be added to the the Rendezvous point system above planet 5 A, the location of many deep space expeditions heading to beagle point.
Click to expand...

Would prefer one in a place I can actually visit as a non-explorer. How about in earth orbit? The man deserves nothing less IMO.

If beagle point is the best we can get then sure, though.

Deeply saddened by this news, CMDR WCOASTSANDS supports this petition for a memorial beacon.

CMDR Cruel Rabbit supports this. In fact, he teared up a little. Damn.

Sad news.
That man deserves a real life memorial in real life space. Or something more useful named after him.
But yes, please give him a station or a megaship, Frontier. Or a black hole in honor of Hawking Radiation.

I think a memorial beacon would be nice

With regards to the petition to create a memorial, I don't know.
There are a lot of stations and one system that's named after Stephen Hawking. 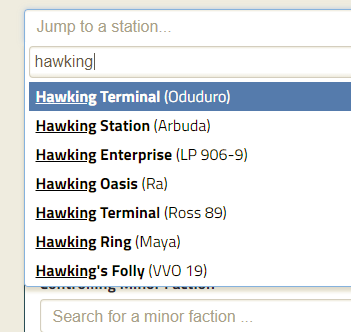 He was memorialised long before he died in this far flung future of ours.
While I don't think he needs another memorial, I do like the idea of a far flung tourist beacon that we could all go visit to pay homage to the great gentlepeople whom on which we stand.

I support putting a memorial beacon into the game, but i would prefer putting it at V1357 Cygni (Cygnus X-1 black hole). Maybe a station called "Hawking Memorial"...

N
Now that I think about it, stations and bases on Sol system should be named after astronomers or astrophysicists... Stations orbiting Earth should have been named Newton, Einstein, Hawking or such... No offense to Gorbachev, his supporters and Russians, but why did Fdev choose Gorbachev as one of the names? It's rather awful choice.
You must log in or register to reply here.
Share:
Facebook Twitter Reddit WhatsApp Email Share Link
Top Bottom