Closest You Have Came To Disaster with an Expensive Ship

C
This post is where you can show how close you came to really mucking up your expensive ships with all your expensive cargo and modules. You can add a short story, maybe a screenie (in spoilers please, to keep the comments from filling space). Remember, this has to be a really scary moment, not just receiving a stupid message from a stupid pirate with witchspace clouds for brains and having said pirate slam into a planet at the speed of light because your rear end was facing said planet. Here's my submission:


I was in my new exploration Anaconda I just engineered for that nice 50ly jump range. It also has lots of fuel tanks inside allowing it to be able to reach the California Nebula on a single refuel, warranting the name Endurance. The DBX was good but this had more defences, SRVs, crew space, etc. I drifted 10,000ls away from Jackson's Lighthouse while in the galmap and decided that I'd come for a low pass around the pulsar. I get cocky and I try to get within a light second whilst travelling at 20 times the speed of light.

Moral of the story - don't boop the danger pole with your annie's snoot.​ 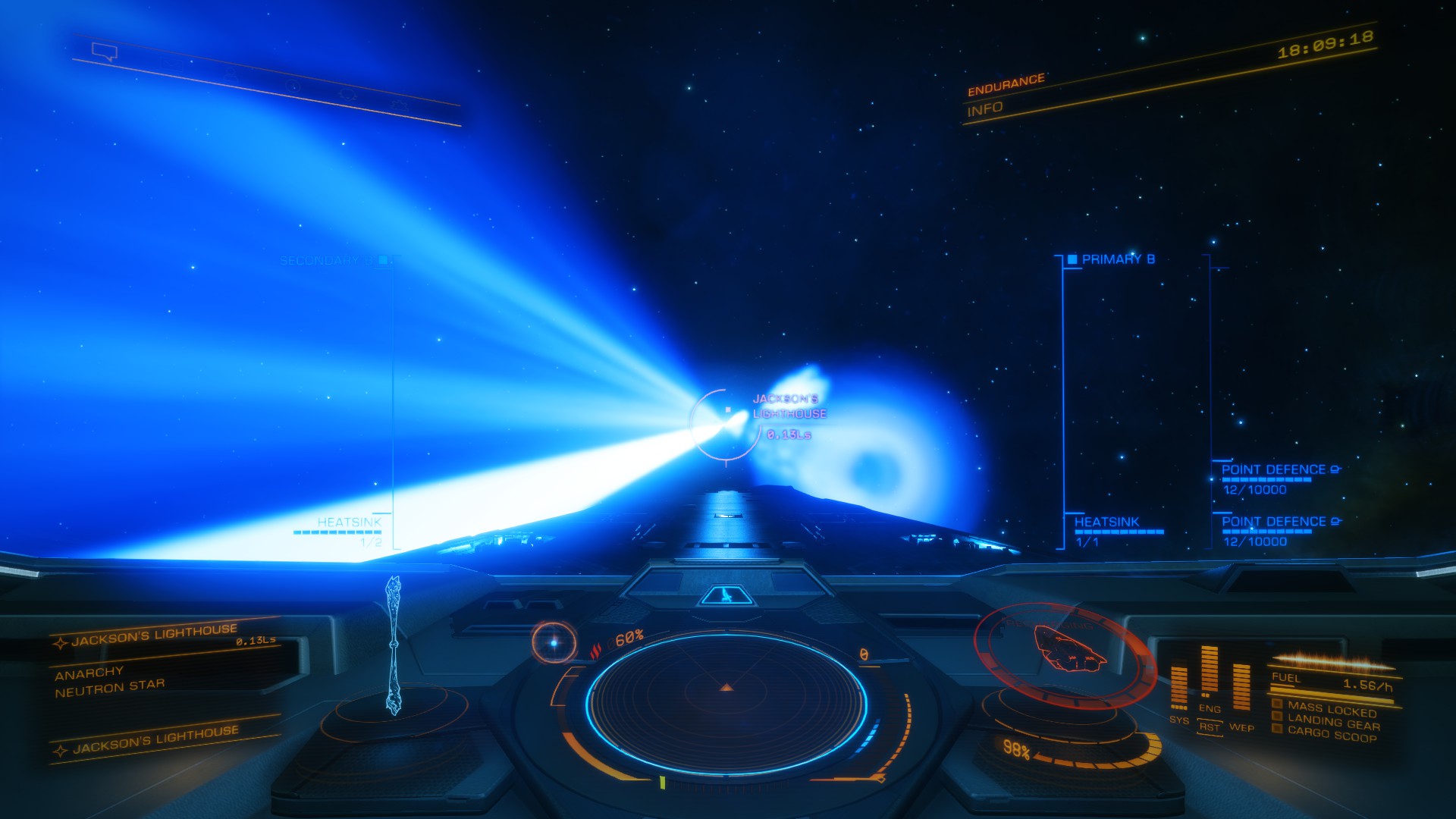 Footnote: I know I'm inferring that I have a lot of money when I said I would've only had 10% less money if my ship blown up, but it's my 3rd or 2nd most expensive asset, behind my mining python and my combatconda, Apollo.

Maiden flight of my first T-10 I got stuck with the spoiler in the toaster rack. Almost ran out of time before getting blown up when I remembered to toggle my landing gear to get free. Just barely made it out.

Despite having more time in my Viper and FDL, I have more rebuys in my vette than in any other ship. The big ships are a unique challange as they are one of the few ways it's really possible to overextend yourself, or back yourself into a corner, from which escape becomes truly difficult.

It takes a miracle on the part of my opponents to down my FDL in a combat scenario. To down my vette, I just have to make a few serious mistakes. Have lost four or five in PvP and one to a white dwarf jet cone while trying to land on 'the planet of death'.

Anyway, I still don't lose ships often enough for the rebuy to matter, even with my CMDR only averaging about 400k credits an hour.

Number of times fighting in PvP.. remembered that log off thing just in time. WOW... that was close.

Schmack said:
Number of times fighting in PvP.. remembered that log off thing just in time. WOW... that was close.
Click to expand...

No! Just happened to have a thunderstorm outside at the right time it seems. Happens a lot.

Of course this is tongue in cheek.

It's a big list for me. All down to messing around or not looking what I was doing. So, things I've learned:

Don't start learning to fly FA off in a Cutter inside a station.

Jet cones are bad if you drop out of SC in them.

High wake from Thargoids if you poke around a level 6 NHSS with 600t in your hold, you can't outrun them. Why are you even there?!

Seriously, don't try learning to fly FA off inside the station in a Cutter (Mentioned twice as I didn't learn the first time).

Hey, it's only credits (and the occasional NPC pilot- there's always more where they came from).

I got attacked by two fully engineered ships. One was a Corvette, the other a gunship. I was in my corvette, with a rebuy cost of 39 mil.
I managed to kill the Vette, the gunship was chaffing almost non stop, and had PA's with target lock breakers and phase sequencing. I had all gimballed beams. It was fff ing hard to hit him, and he really new how to fly.
He was down to 13% hull. I was down to 7% hull.
I was in a bad way. Thrusters shot out, most systems were malfunctioning, I had to do a re boot and repair, while my fighter hopefully kept him busy.
Amazingly my fighter killed him.
And I limped home with 1% hull, and no canopy.
Did the most gentlest landing anyone has ever seen.

During premium beta, it was pretty common to fly without rebuy in order to be able fly all available ships, before the next cycle would start and you'd lose everything anyway, but still...

So a given cycle was long enough for me to gather all I had an buy a T9, having only a couple of credits left for fuel. Because the thing handles like a turtle on roofies, and because of the size, I was really focussed on not scraping the paint, not colliding with an NPC and not getting stuck in the entrance. Lined her up nice and easy, tried my best to compensate the circular movement of the station all the while aiming for the correct height... and forgot to ask for landing clearance...

I got out on time eventually.

Yeah, sorry, not much to tell.

What happens if you try to Combat log the self destruct?

Vandaahl said:
During premium beta, it was pretty common to fly without rebuy in order to be able fly all available ships, before the next cycle would start and you'd lose everything anyway, but still...

So a given cycle was long enough for me to gather all I had an buy a T9, having only a couple of credits left for fuel. Because the thing handles like a turtle on roofies, and because of the size, I was really focussed on not scraping the paint, not colliding with an NPC and not getting stuck in the entrance. Lined her up nice and easy, tried my best to compensate the circular movement of the station all the while aiming for the correct height... and forgot to ask for landing clearance...

I got out on time eventually.
Click to expand...

Like said, I was taking it easy to get in, so I was only half way through the slot when I got the message. Besides, I don't recall it to be 30 sec, in those days.

Nodding off while gliding towards a planetary base. Woke up just as my then brand new Anaconda faceplanted into the ground just outside the base...

Banned
D
Trying to supercharge my FSD at a white dwarf in the Annie. Kept dropping out and overheating.
Tried it thrice, and wiping out several modules to zero and at one point nearly overheating to 300%.

Think this one had a large exclusion zone that nearly engulfed the jets.

Wisely decided, screw that one and took a different route.
Last edited: Jun 7, 2019

I've taken a hard landing on a world not paying close enough attention ahead of time to the Gs within the past half year or so. Got me down to 40% hull. Was kind of fun in a way as the "oh crap" moment came soon enough for me to change my pips an the like. Probably would have lost the ship if I hadn't. So, not a loss, but a meaningful point of reflection for me none the less.

I haven't actually lost a ship since 3301 (2015) when farming NPCs for combat rank and got lazy not paying attention to my hull and shields taking on an Anaconda. Was doing the same thing over and over again, so it all kind of was just washing over me. It served well in a sense and woke me up with a: "what the hell am I doing this for anyway." Since then, I mostly just care to play the game in ways I actually care for instead of the (subjectively) silly meta progression.

I had already proved myself in Open against other Commanders and the game itself to my own satisfaction. The rest since then, well, it's mostly been just for me without having anything to prove.
Last edited: Jun 7, 2019

T
Was coming in to a planetary base nice and slow. Delivery run for a couple mill, I had just bought my Krait and trying to get my bank balance up to normal. I was easing in to normalspace at an acute angle to the planet surface, nice and easy. I wanted to see if I could fly low like a speeder. Turns out the planet was high gavity. I did a couple of skids before blowing up.

Schmack said:
No! Just happened to have a thunderstorm outside at the right time it seems. Happens a lot.

Of course this is tongue in cheek.
Click to expand...

Real PvPers live in a Faraday Cage you FRAUD!

Man there's so much EMI I would have to seal off myself. USB 3.0 vs. 2.4GHz is a beast, let me tell you... Sorry, I'm a bit of a tech nutter with all kinds of wireless stuff running. I light up the neighborhood with my wi-fi and other gear. Would be better for them if I cage myself in, I suppose.

Currently looking into talking with the ISS on HAM radio and bouncing radio waves off the moon. Will omit talking with other satellites for... self interest reasons. To be clear, no worries on programming them and the like. I'm not a cracker. I just find this stuff interesting.
Last edited: Jun 7, 2019

Killed my DBX last night at a Guardian Structure.

My Thrustmaster Warthog throttle Coolie Hat switch was translating thrust up as thrust down and staying stuck on down as I was trying to land. Never had that happen before. Spent this am troubleshooting and tore it apart/re-assembled, blasted it with some dust buster then loaded the target software and tested the function of all the switches. Everything tested fine and hasn't been an issue since.

Wasn't much of a re-buy, but it's the first one I've seen in a couple years.