hope they overthink their pricing but if the didn´t last 4 months, in general arx is a good idea for players and marketing aka. sales. But for what we know now its just so poorley implentet like multicrev 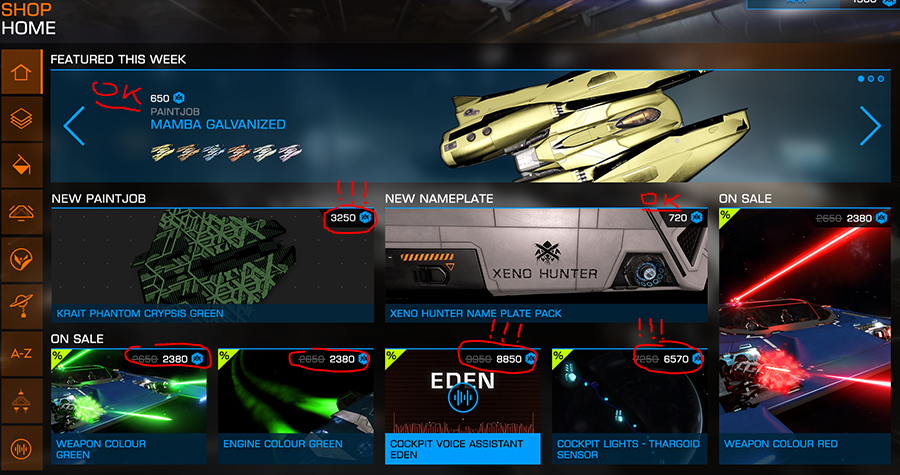 I think it's fine, before they were paid and now if you play after a while then you agree to have a painting.
You criticize for something that comes out free to play, it doesn't make sense or logic, it's just criticize for boredom.

Thanks Frontier for these gifts, for playing.

M
This is all a bit crazy.

At the moment we have to pay for every painting. After the update, we can earn it for free. That's what matters.

You all cry because of too little content and want to have everything as fast as possible for free. How do you think employees and servers are then paid ? Are you expecting lifetime support from the few bucks when you bought the game in a Steam Sale?

So I bought something in the store on a regular basis and will buy ARX regularly to support the game.

Without money, no game.

As someone who buys a lot of cosmetics on the store I think this is a great change and I am looking forward to when the update goes live next week. Not only will I be able to budget better by buying an Arx pack on paydays I will occasionally be able to get a cosmetic for free as I do play Elite a lot.

People seem to be trying to calculate ARX per hour but what I saw was your man discover a system, shoot some stuff, scan a couple of things and he earned ARX. That took him some time to do. He basically did a one system jump courier mission.

It didn’t seem based on how long he was playing, more those little activities he did. I could have done those same activities in 5 mins and my bet is, earned the same ARX.

He didn’t seem to have to cash in his exploration data to earn the ARX so deep space explorers are covered.

I play at least a couple of hours a day, I bet I get this maxed out in no time. 3 days tops.

MaverickSTW said:
You all cry because of too little content and want to have everything as fast as possible for free. How do you think employees and servers are then paid ? Are you expecting lifetime support from the few bucks when you bought the game in a Steam Sale?
Click to expand...

People don't want stuff for free, people are happy to pay for something with CONTENT!
If you sell people a big world/entertainment product with not much in it and tell them to "make your own story" and "blaze your own trail" and "just RP it", of course people will get miffed. People bought an entertainment product and want to be entertained.
Imagine you going to the movies, you pay your ticket and you are given a sketch pad and are placed in front of a big CGI screen. "Make your own movie"
Wouldn't you be screaming too? Of course, make sure you buy the cosmetic popcorn and drinks because you have to support the theater.

picommander said:
It's not about you and me. You (and Frontier) just need to understand what the result will be: hundreds if not thousands of players leave their PCs online, 24/7 (for literally fluff) and that's almost as ignorant to global warming as you possibly can be in these days. But then it seems Frontier isn't even able (or just don't care) to track active playing. Still can't believe they went this route... and that's someone saying who probably has the highest number (8000+ hours) of playtime in ED.
Click to expand...

The sort of people who would conceivably leave the game running just to earn ARX are not going to be the responsible environmentally conscious sort anyway, that's not FDEV's fault.

FDEV obviously can track active players as the friends list in game shows you when people were last logged in. They just don't give us and their competitors that number. Which makes the forum undead gnash their teeth.

As someone who doesn't even bother to claim the free cosmetics I think its great.

It's the bonus points which should motivate to buy bigger packs. Hence, I think, they are going to stay.
Also, if you stay away from the 49.99 investment with that really nice bonus, the 4.99 one is a nice step up from the 2.99
Click to expand...

I took it that the bonus is included in the 85k, if not, you are correct

MK_Regular said:
So Will earned 12 Arx on the livestream, 9 for 'Exploration' and 3 for 'Other'. Considering that Will spent a around 34 minutes in the pilot's seat (they re-log around the 9 minute mark, and log out around the 43 minute mark), we can assume that the Arx earned per hour for being somewhat active (there are periods where Will is talking to the camera rather than actually doing anything) will probably be around 20 Arx/hour, meaning 20 hours per week to reach the 400 Arx cap. Note that it will probably be possible to earn more Arx than this by actually playing the game without stopping to talk to the camera.

As for what the minimum Arx/hour would be for sitting AFK, if we assume that the 'Other' category is based entirely on time spent in game, we get a total of 5-6 Arx per hour for just being in the game. This means that the upper limit for the amount of time needed to reach the weekly 400 Arx cap would be around 70-80 hours, or about 10-12 hours every day sitting AFK. Again, it is important to note that it will be possible to improve your Arx per hour by actually playing the game.

On a side note, Will spent about 8 minutes of the livestream either sitting on the landing pad doing nothing or sitting in space not moving. With the entire time spent in the sidewinder coming to just under 34 minutes, we can assume that the amount of Arx earned on the livestream is only ~80% of what players would normally earn in the same period of time. If we take the new value (15 Arx for 34 minutes), the amount of Arx per hour increases to over 25 Arx per hour, meaning that the weekly Arx cap of 400 could be reached in 16 hours.
Click to expand...

For that, CMNDR WIlliam earned 9 Arx for exploring and 3 Arx for "other".
If there is an "Exploring" category, I think it is safe to say that there is also "Combat" and "Trading" categories, neither of which Adam earned. He did do combat, but only on sitting ducks, so it might be reasonable to not throw Arx at him for that. He did spend proper time flying and scanning though.

So it seems to me that two scans, seven lightyears, and 578 lightseconds adds up to 9 Arx. We don't know how it adds up of course. It probably isn't one Arx per lightyear and one per scan, much as that might be nice. It seems likely that exploring awards Arx for jumping and that a single seven lightyear jump earns at least one Arx. Whether that is for each jump or per lightyear, that is eminently earnable. I am going to be getting lots of Arx flying 500ly in 30 jumps to a void opal hotspot. If the per jump Arx is very low, then the per scan Arx will be very high. Assuming FSS earns the same as the data link scanner, then I can earn maybe four Arx per system when exploring. Only 100 systems per week to max out Arx.

As for the "other" category, I can't see how that is earned. It could be one per dock/undock and one per half-hour, but with 168 hours in a week, that would be 336 Arx for just sitting in the game. That seems rather high. Or you could just grind dock and undock. So I doubt that is how it works. Even one per minute in SC would seem to pay out far too much going to Hutton Orbital, but it's over four trips per week to get the cap, six hours and forty minutes in SC, so that might be reasonable.

Ralph Vargr said:
I just went to the Frontier Store, to see if there was anything I wanted to buy in cash.

The desire to buy stuff abended.
Click to expand...

Just a quick question, what does abended mean?

Looks like buying Arx will be cheaper than paying for the electricity to have your PC running for so long.

Also not a fan of the prominent presence of Arx and the reminder of how much you've earned. Feels almost a bit predatory to hook a certain type of player

MercutioLeonhart said:
Just a quick question, what does abended mean?
Click to expand...

Unless it's a typo for abated, It's jargon from IBM mainframe computers: a contraction of Abnormal End. It's a programmed action, but one used when the program cannot continue. ie an abrupt stop with the implication that he gave up on what he was doing.

It's too early to judge how good or bad arx will be until we see how prices are converted into arx on the store. My worry is we'll see a stealth increase in prices once the conversion is made but I guess we'll find out next week
I was disappointed at how the stream avoided mentioning the new pricing structure as 400 arx per week sounded awesome until it transpired that's only 20 frontier points lol

I really can't be bothered to read all this but ARX are a non-issue as far as I'm concerned. A paintjob will probably cost almost exactly the same as it does now and as for the free ARX we earn while we play ... whether we earn the equivalent of a penny an hour or a pound a week, who cares? It's free money!

Tikanderoga said:
People don't want stuff for free, people are happy to pay for something with CONTENT!
Click to expand...


Tikanderoga said:
Imagine you going to the movies, you pay your ticket and you are given a sketch pad and are placed in front of a big CGI screen. "Make your own movie"
Wouldn't you be screaming too? Of course, make sure you buy the cosmetic popcorn and drinks because you have to support the theater.
Click to expand...

More like: Imagine you have a game you enjoy, but where you have to pay for cosmetics, and until now, you have been paying for the cosmetics you want. Now imagine the devs say, ok, you can still pay for them, but you can also get them for less or even for free the more you play.

I absolutely expect to see more timed exclusives now to give people in incentive to buy some Arx now rather than just wait to get it for free.

Maybe the Cobra MkIV thread will finally get some siblings.

Looking for a reply from FDev.

Looking for a reply from FDev.
Click to expand...

It must be frustrating not to know which one to complain about yet.

Stigbob said:
It must be frustrating not to know which one to complain about yet.
Click to expand...

Unless you now work for FDev, Eff off.

Stealthie said:
Unless you now work for FDev, Eff off.
Click to expand...