Isinor permit was once given (had it years ago) but then it wasn't available. I read somewhere it was supposed to be fixed.
Hasn't it be fixed or did it then broke?

I try to get a timeline of events concernung an old patch notes i saw when fdev put "valuable salvage" in Isinor, Witch's reach and LFT 509 (in Isinor, salvage is antiquities for the record).

Factabulous said:
Nice! 18 ly out, so theoretically not useful for vending permits - which is weird unless fdev really have changed the range for permits. Probably isinor has one in the 15-20 range as well .
Click to expand...

I've sent my Bubble alt (currently lacking the Jotun permit) to the Indefatigable in 38 Arietis. The permit mission is visible, despite being over 15ly away from Jotun.

Running missions from there would be a pain, as it has no shipyard or outfitting, you'd have to run every mission with the ship you turned up in, without being able to swap passenger cabins or whatever. So I relocated to Shasir. Still just over 15ly away, but the permit mission is still visible. So probably a global change to 20ly.

That makes all the guides and info now wrong It would be great if fdev would tell us when they change these things. Especially when it didn't solve any of the issues with permits so wasn't something anyone would look for.

24 NOV 3307
Factions responsible for the distribution of conditional access permits have deployed so-called Gatekeeper megaships to neighbouring systems.
The agreement between 14 factions intends to allow permit distribution procedures to continue regardless of the political status of the associated systems. Though the reason for system access restrictions varies between the factions, preventing any disruption to interstellar trade was a key factor in the talks.
A spokesperson for Alioth Independents, one of the factions involved, offered the following:
“It is rare that so many participants from across the core systems are able to reach an agreement so easily. These megaships will ensure that the flow of traffic within our respective borders remains appropriately controlled, providing support for the permit offices in those systems.”
“Only a few short years ago, the system of Tiliala saw disruption in assigning permits to eligible visitors due to political disturbances. The Panjabell system experienced this problem again within recent months. These lessons have inspired us to prevent further repetitions in the future.”
“I would like to thank each faction representative for their contributions to maintaining consistency in our methods for the ease of pilots, recognising the valuable contributions they make to the galactic economy.”
Permit distribution to eligible recipients will still be carried out remotely.

edit: Ahem - looks like a typo with Panjabell meaning Peregrina ..
edir2: Also no mention of the switch from 15Ly -> 20Ly permits which some have suggested has happened
Last edited: Wednesday at 3:31 PM

N
...Yep, definitely 20ly limit now. Got the Jotun permit at the megaship, then did some testing with the Brotherhood of Terra Mater. Permit mission visible at Wolf 12 (18.69ly from Terra Mater), but not at Yen Ti (20.4ly).

Does the Mbooni permit (from the megaship) working finally?

Kryxix said:
Does the Mbooni permit (from the megaship) working finally?
Click to expand... 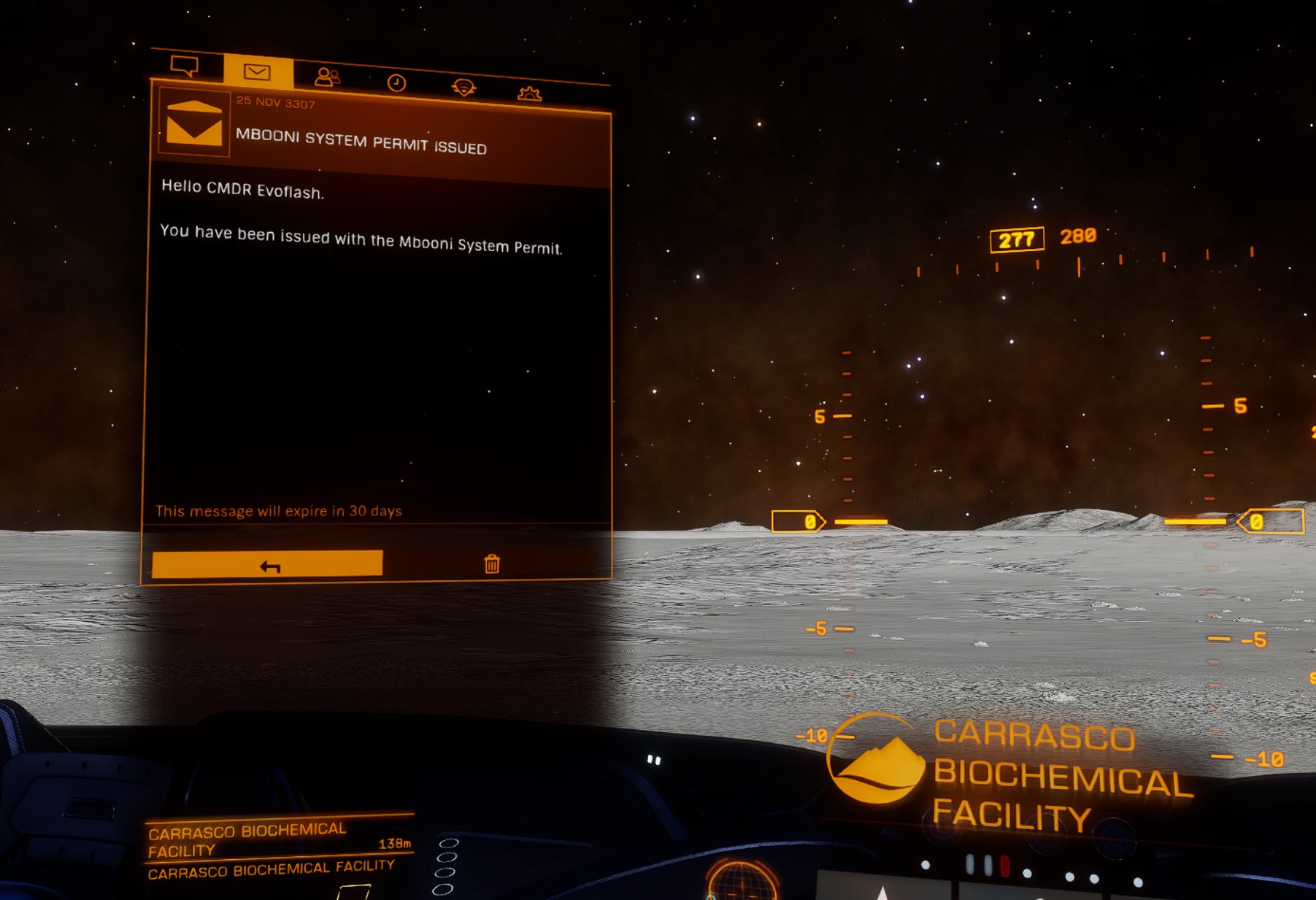 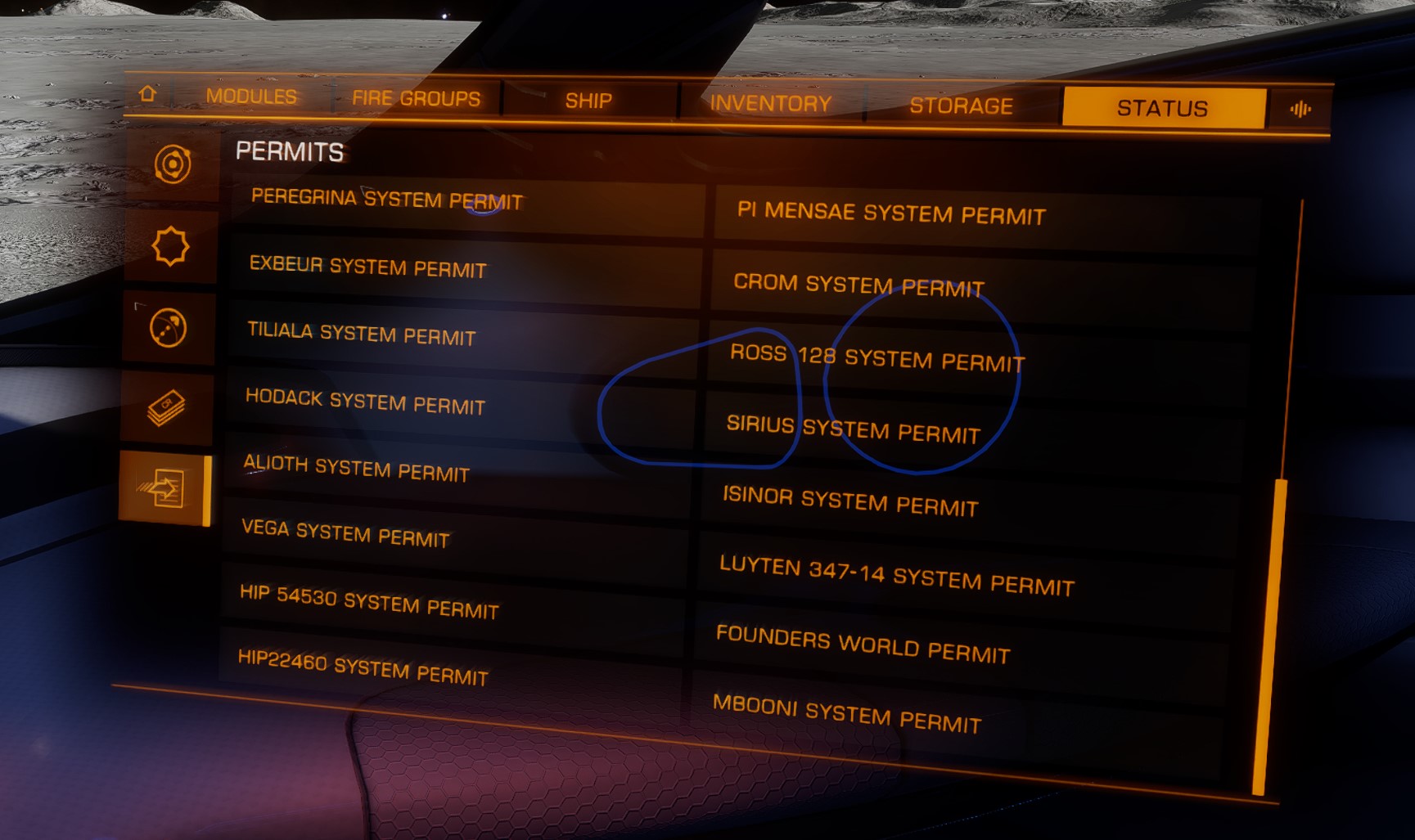 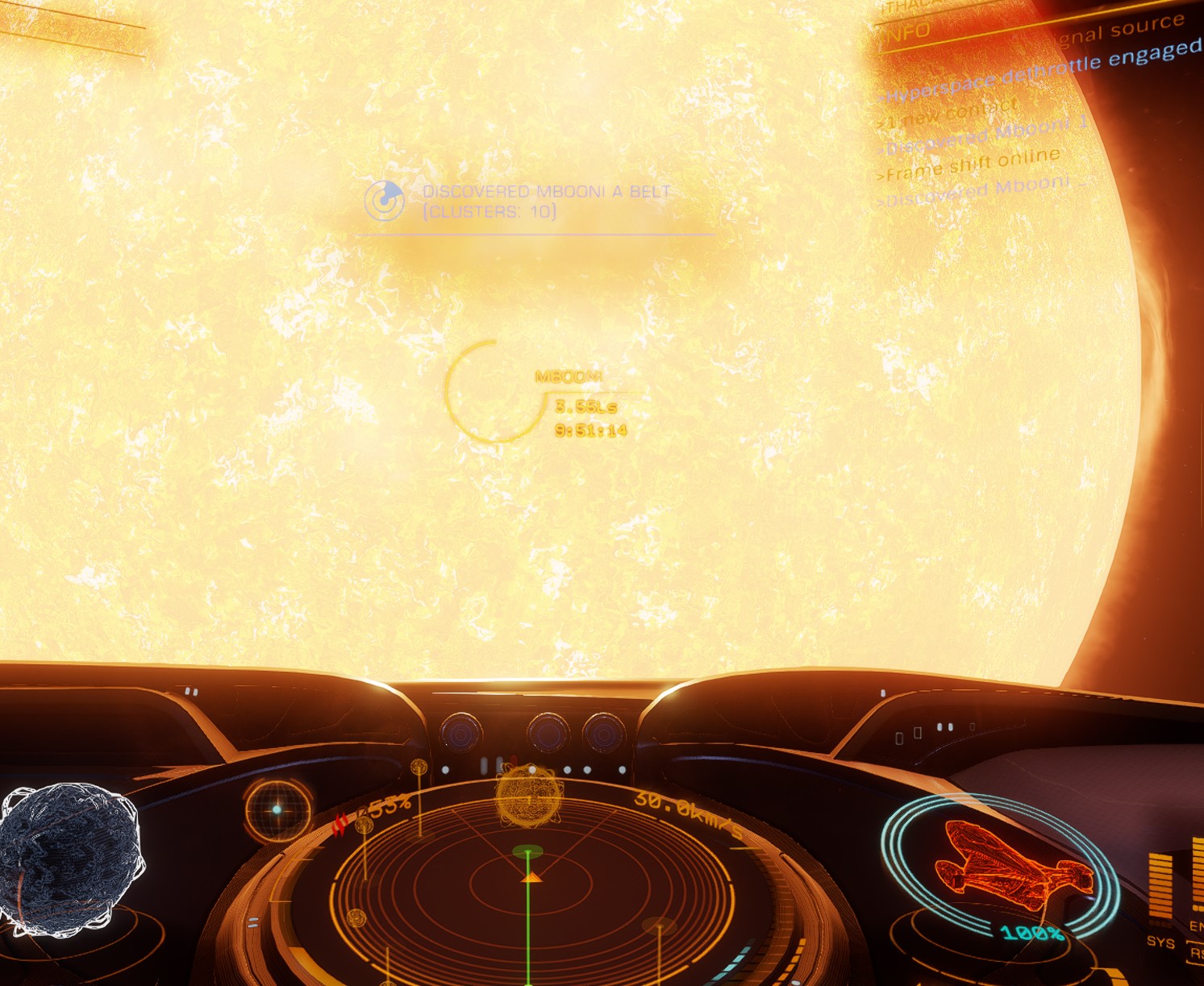 T
And still Grasp of Unity megaship is NOT offering HIP 54530 system permit. At least in my case.

T
It seems someone is pumping influence to expand out of Mingfu. Maybe a permit opportunity will arrive soon.

H
What is currently the maximum number of accesses?

Hudiny said:
What is currently the maximum number of accesses?
Click to expand...

If you mean how many systems need a permit, then I have this list (what I've been working from personally, hence the annotations):

Code:
This doesn't include areas of space outside the bubble.

Darkcyde said:
If you mean how many systems need a permit, then I have this list (what I've been working from personally, hence the annotations):

Code:
This doesn't include areas of space outside the bubble.

There seems to be an error in your list: The Luyten 205-128 system doesn't seem to require a permit: 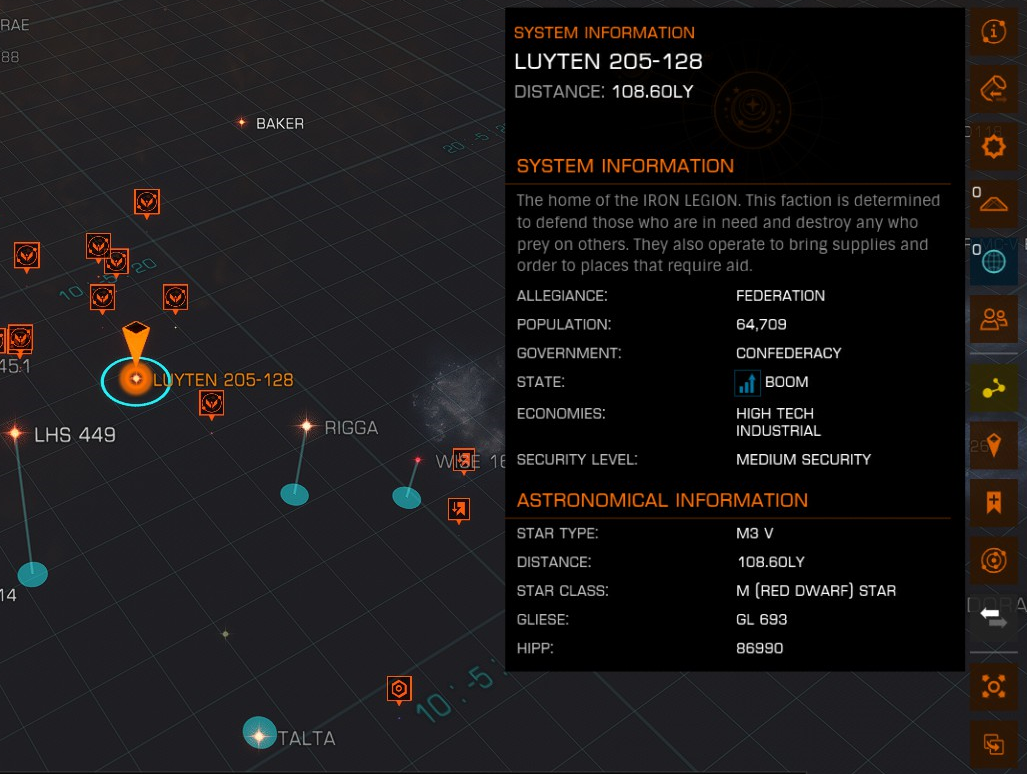 Or is it included in another permit? 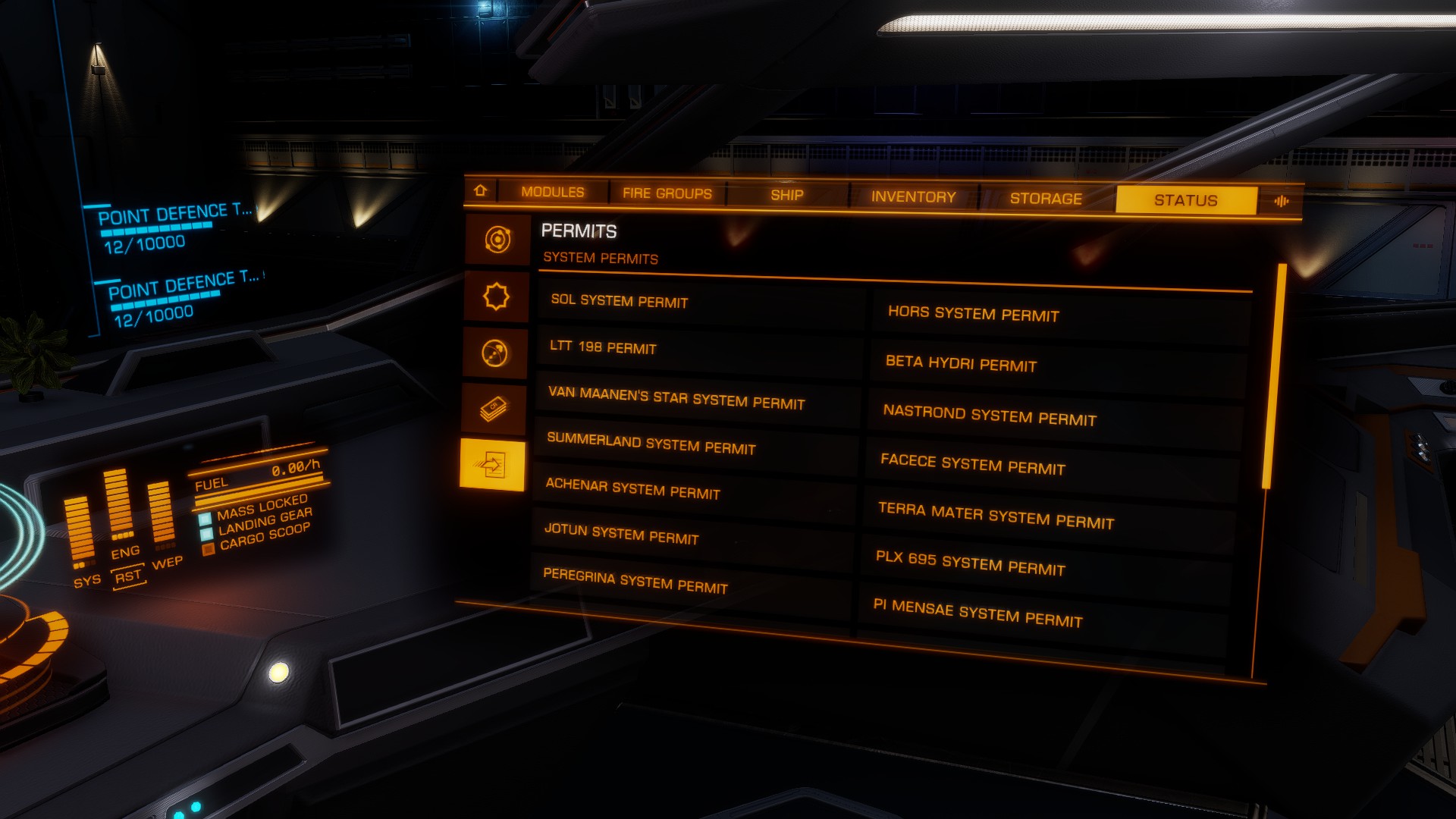 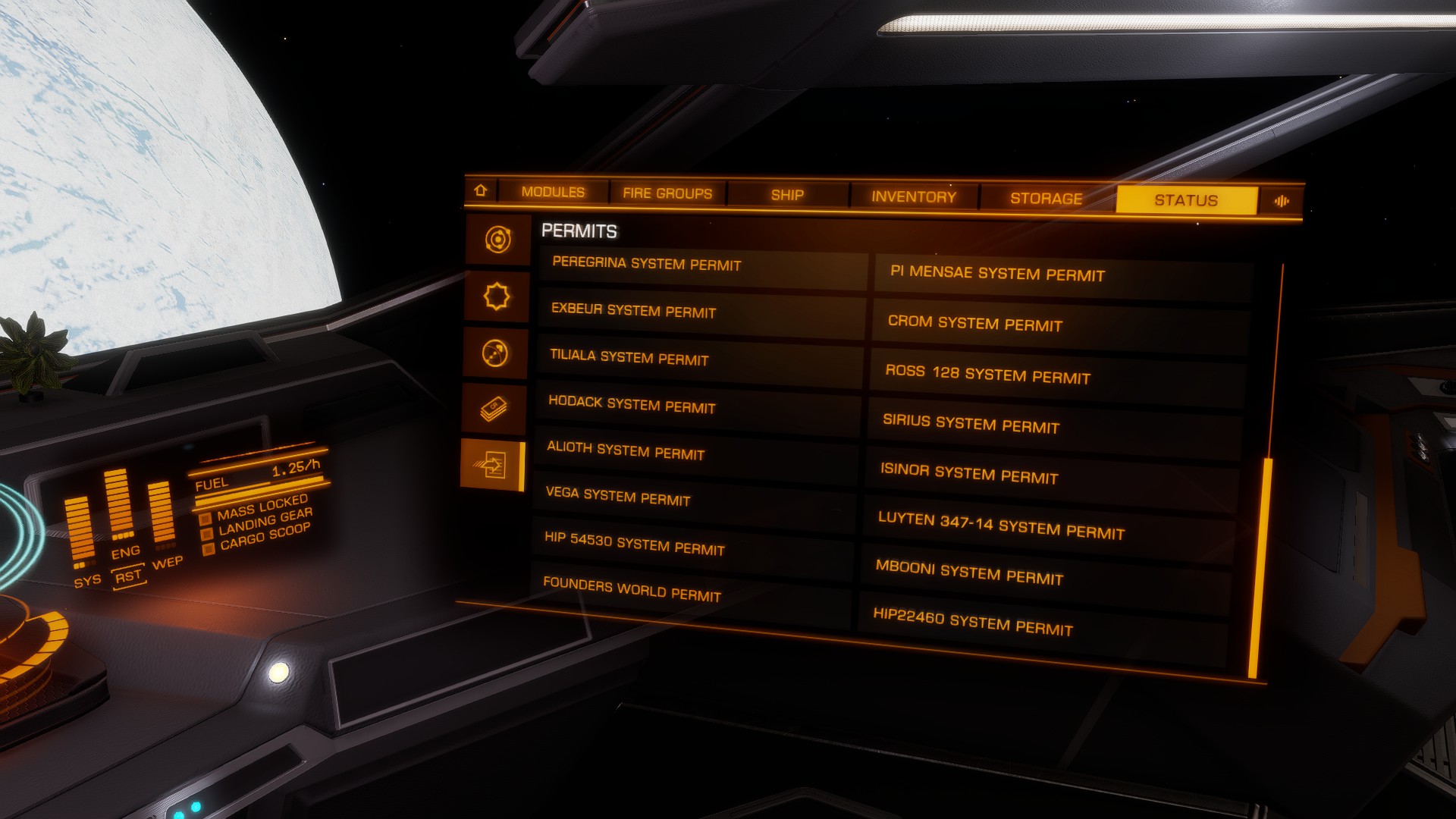 I applied my permits on that list (starter systems removed because to include them makes no sense, also they make up only a single permit):

Edit: You cannot strikethrough in code, so I moved the list to a quote.
Last edited: Yesterday at 7:30 AM

I would also like to stress that 4 Sextantis might still be accessible according to in-game descriptions, but the other systems in that list are not.
The other systems have a statement

This system is locked by the Pilot's Federation, no permits are currently issued.
Click to expand...

written under 'System Information', while 4 Sextantis does not: 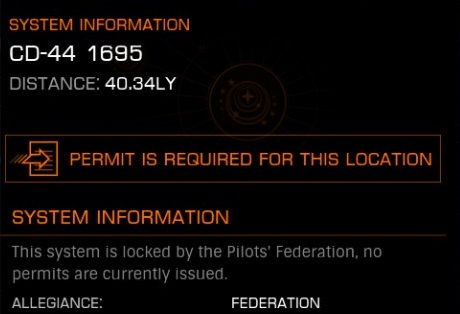 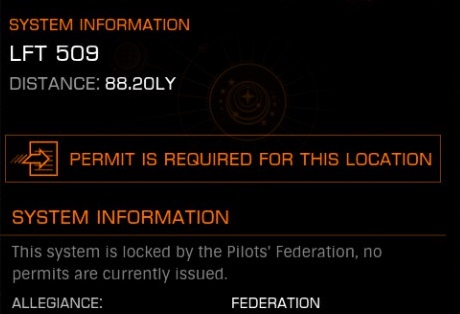 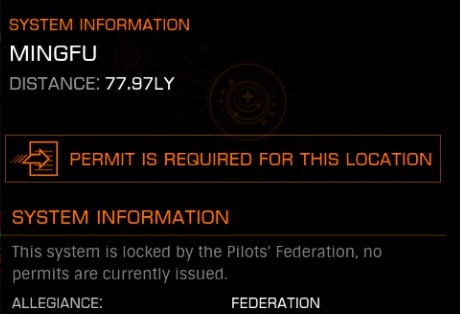 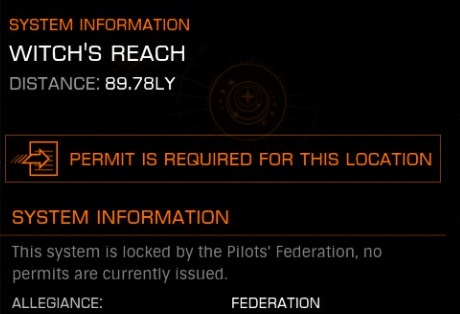 These are my gatherings and ramblings unashamedly copied from various sources that I use as a personal tracking tool. No credit to me.

Dragorion said:
There seems to be an error in your list: The Luyten 205-128 system doesn't seem to require a permit:
Click to expand...

Hmm, that must be a very recent change in-game then. As noted, I had gained allied with the corresponding faction only a couple of weeks ago, and had the permit mission available to accept on the mission board. The reason I hadn't done so yet, is because I was helping out the EDDI team with updating their code that handles permit missions. I'd held onto this one (and one other) in case they needed me to try anything else out for them.

Dragorion said:
Or is it included in another permit?
Click to expand...

Not that I'm aware of. So I guess this one is redundant now.

Unless, of course, FDev have messed up and accidentally removed it.

Dragorion said:
Edit: You cannot strikethrough in code, so I moved the list to a quote.
Click to expand...

Yeah, I only made it code because when I copied the text from my text file, and tried a quote, the plain-text file formatting put things all over the place, and code was the quickest and easiest way to post it.

Dragorion said:
I would also like to stress that 4 Sextantis might still be accessible according to in-game descriptions, but the other systems in that list are not.
The other systems have a statement
...
written under 'System Information', while 4 Sextantis does not:
...
This is also indicated in the list by "Currently unobtainable?" vs. "Currently unobtainable.", but this is very subtle and easy to miss.
Click to expand...

Yeah, I had noticed that too, hence the question mark for that entry. However, I've now had another look over the elite-dangerous.fandom.com page, and it has this entry:
"Become Allied with 4 Sextantis Inc and complete invitation mission(Blocked)"
The 'blocked' link text reads:
"Completing this permit's invitation mission never rewards a permit. According to Frontier Developments, this is by design and 4 Sextantis is not yet meant to be accessible."
So yeah, still not available after all.

Like I said, it was only a list I was working from personally. I hadn't intended it for a public release at all, I just thought it would be helpful when Hudiny asked the question.

EDIT: So, I went to Luyten 205-128 to check it out. Turns out I'd been there three times already, so I was a bit confused. However, I think I know why I thought that it needed a permit, because it seems that it did at one time. Not sure when it was changed though, and it seems my getting allied was a waste of time, although I was sure I'd seen a permit mission for it. Guess I was just misremembering. Apologies for that.

I did find where I got that idea from though. Apparently EDDB says it needs one https://eddb.io/system/12975, and an (old?) fan page mentions it too http://www.fenris.co.uk/elite/project/permits-access-required/

So it definitely needed a permit at one point, I'm just not sure when it was removed.
Last edited: Yesterday at 6:16 PM